We're pleased to spotlight Sight Unseen, a series of romance novellas -- with a twist! Keep reading to learn more about the book and enter to win an ebook copy of Sight Unseen! 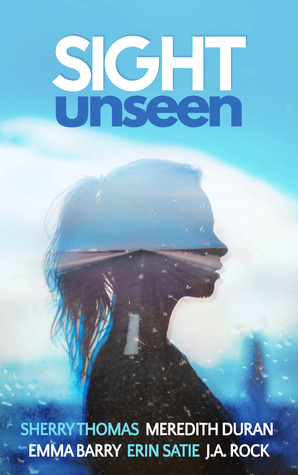 What stories would you tell if you could? Where would your mind take you, if you let it? Five of the top voices in romance dare you to explore the most distant corners of their imaginations as they test the limits of storytelling and break the boundaries of what even they thought possible, teasing and tormenting you shamelessly as they go.

But there’s a twist—the author of each story is a secret at the time of release. They’re each plumbing the depths of the human heart and mind in ways they’ve never attempted before. Taking you high, bringing you low, until you will be hardpressed to guess who wrote what. Can you tell? Want us to?

**Use hashtag #SUwho to follow in the fun of guessing which author wrote what!**

About the book, from the introduction:

We all have auto-buy authors, but what is the promise made by the name on the book cover? Is it about voice? About a certain type of story? About how reading it will make you feel?

If we took that name away, would you even still recognize it?

That question is where Sight Unseen began: gather five authors, publish an anthology in which each novella is anonymous, and see if readers can correctly connect the stories with the authors.

The concept didn’t stop there because once you remove the name from the story, it’s free in a way other writing isn’t. There’s no brand to worry about, no expectations to meet. The writing has to stand by itself.

The project took on a life of its own, becoming an experiment wrapped in a puzzle. It offered a space to play for authors and a game for readers, but it raises questions for all of us about how brand and marketing shape books, how we read, and what we think we like.

Because it would be maddening to never learn who wrote what, Sight Unseen comes with an end date. Three months after release, the authors of the stories collected here will be revealed. But in the meantime, we offer five intriguingly different stories. Each is unsigned, but also smart, sexy, offbeat, and most importantly, surprising. 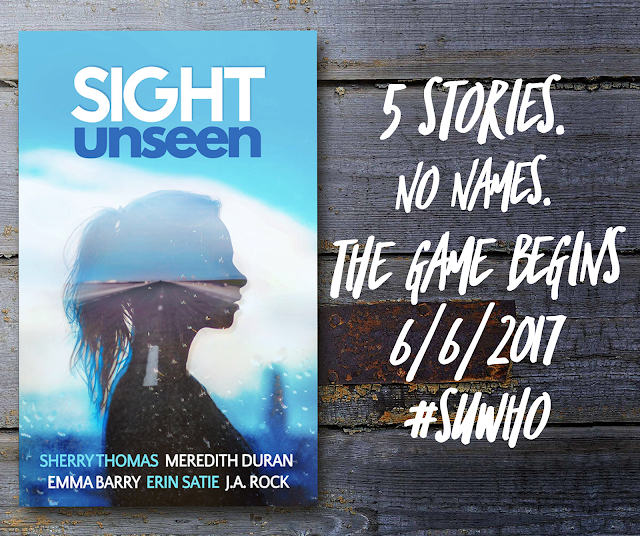 Want to know more about the concept? Here's each of the authors talking about their experiences.

Emma Barry, author: Almost immediately, writers get pigeonholed by their subgenre. That choice affects what you write, how you sell it, who you query, your website design, what pen name you pick, and basically everything else you do. Writing anonymously snipped those strings. This project got to exist totally outside of my work in a way nothing has since my debut.

Meredith Duran, author: As a reader, I’ve sometimes felt jarred when my favorite novelists switched genres (or even subgenres). It seems to me that a genre novelist, in particular, enters into a subtle contract with her readers: they await her next book with expectations formed by the last one she wrote. But the key feature of this anthology is the unlikeliness of a particular set of authors writing stories totally outside their accustomed areas of focus. So, the anthology felt like a chance to experiment without violating the trust that undergirds that unspoken contract between readership and writer. (So I hope!)

Erin Satie, author: In retrospect, I signed on for exactly the wrong reason. I was thinking about how much fun it would be to read the novellas completely blind and guess at the authors. By writing one of the stories I made that impossible but it's still the coolest, funnest idea for an anthology project that I've ever heard.

Sherry Thomas, author: I was so happy when Judith asked me to be a part of her anthology--finally, a deadline so I can finish an intriguing story. I'm doubly delighted because this is also the first time I've written a straight-up romance in about two years. Love writing romance!

Still curious? Here's some more details about each of the stories:

Lost That Feeling
Alma knew who she was, once—that is, before she erased her memory with a spell. Some, like the guards at the prison in which she’s held, say that she was a thief, a murderer.

Others say she was a hero. Like Driss, the man who rescues her. He claims to be a friend. He's certainly handsome. And charming. And brave. In a word: perfect.

That's the problem. If he's perfect and she's a hero, how did she end up in prison with a seven-year hole in her memory to begin with?

A Clear View of You
As a child, Kate had one dream: to escape her mother’s deluded hippie commune and live in the real world, where mature adults know that magic isn’t real. But the real world also has its downsides—like rent, student loans, and a cutthroat job market.

Happily, Kate is uniquely qualified for one in-demand position: psychic. Of course, she’s as fake as the rest of them, but nobody plays a fortune-teller as convincingly as a girl raised by a would-be witch. If only Kate’s newest client weren’t so perceptive . . . and attractive. If only crystal balls didn’t have the habit of lighting up in his presence.

Magic isn’t real, right? Kate is about to find out otherwise . . .

Free
Brad White would be an ordinary accountant with an unrequited crush except for two things: he works for a criminal motorcycle club, and he’s in love with the club president’s daughter. When she discovers the truth about the family business, Brad has to move beyond ordinary and put his life on the line to keep her safe.

Wren Masters, unlike everyone else in her graduating class, chose to stay in Fallow, Montana because, also unlike everyone else, she loves it. But when she finds out her father’s club is running drugs, her family and world crumble. She and Brad risk everything to uncover the truth . . . and begin a scorching affair.

As the conspiracy—and their feelings—deepen, Brad and Wren must choose between family and justice. And neither seems to include a future for them.

Chariot of Desire
CJ Crespo, drummer for the once wildly popular rock band Donjon, has always had a thing for frontman Donny Times. They spent the seventies getting high together, making music together, self-destructing together. But her qualms about ruining a creative partnership with sex kept them from ever hooking up. Now, Donny’s conversion to a bizarre fringe religion that won’t allow him to engage in—or even sing about—sex, drugs, or other “sins” threatens to tear Donjon apart.

As the band struggles to embrace a new decade and a new Donny, CJ must decide where she belongs: by Donny’s side, even if he can’t ever love her? Or out there making her own music, away from a man who gives and takes in equal measures?

The Heart is a Universe
On the remote planet of Pax Cara lies the greatest secret of the universe. Once every generation, the inhabitants must offer up an exceptional young person—the Chosen One—who sacrifices his or her own life for the sake of that secret, and the planet itself.

However, Vitalis, the current Chosen One, is desperate to free herself from the yoke of destiny. An unexpected invitation to an aristocratic summit seems to be the perfect opportunity for escape. But almost as soon as she arrives, the most eligible prince in existence proposes marriage.

Sparks fly, but Vitalis is wary. Eleian of Terra Illustrata can have any woman he wants. Why has he set his sight on Vitalis, who, unless she manages to flee, will die in sixteen days? Is he hiding an ulterior motive, one that could put everything in jeopardy—her plans, her life, and her heart?