Jaime Reviews... In a Perfect World by Trish Doller 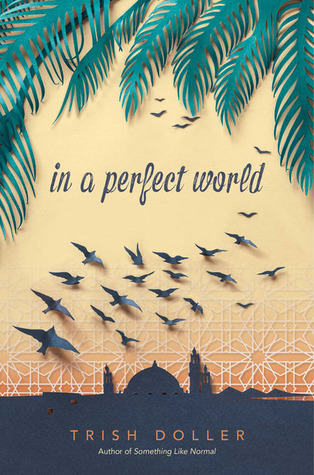 In a Perfect World
By Trish Doller
Published on May 23, 2017
Published by: Simon Pulse
Source: Around the World ARC Tours

Caroline Kelly is excited to be spending her summer vacation working at the local amusement park with her best friend, exploring weird Ohio with her boyfriend, and attending soccer camp with the hope she’ll be her team’s captain in the fall.
But when Caroline’s mother is hired to open an eye clinic in Cairo, Egypt, Caroline’s plans are upended. Caroline is now expected to spend her summer and her senior year in a foreign country, away from her friends, her home, and everything she’s ever known.
With this move, Caroline predicts she’ll spend her time navigating crowded streets, eating unfamiliar food, and having terrible bouts of homesickness. But when she finds instead is a culture that surprises her, a city that astounds her, and a charming, unpredictable boy who challenges everything she thought she knew about life, love, and privilege.

In a Perfect World...

I can't even begin to talk about the book before talking about the cover... I mean, look at it! It is absolutely stunning. I love the color palette, the fonts are perfect, the 3D effect is awesome, and best of all, it fits the story in the best way! Bravo, cover designers! Sorry, I just had to! On to the story itself!

I read a lot more contemporaries now than I used to, but they are still the least of what I read. I am always wary going into them,  worried that they will feel too young or the pacing too slow or any number of different worries. With this one though, the setting overcame the worries. Egypt is an almost untouched world for me in books, and it definitely holds an appeal. Imagining myself as a teenager (or even as an adult), being told that I would have to leave everything and everyone that I knew behind and move to a different country? Honestly, I couldn't even imagine it. So, instead of wary, I went into this one with full blown enthusiasm. And I adored it, mostly. Get to that in a second..

Caroline has lived in Ohio her entire life. She has the same best friend as always, her boyfriend of three years who is a part of her family. It is start of the summer before senior year, and Caroline is excited about the adventures she has planned. She is also looking forward to making team captain of the soccer team when school starts again. But when her dad takes her out on their annual start of summer vacation trip, he breaks the news that her mom's dream of opening an eye clinic in Egypt is finally coming true. And they will be leaving soon. Caroline's entire world is soon to be rocked to its core.

The story opens up on the plane, landing in Egypt. We are in Caroline's head the minute she touches down on foreign soil, and starts taking in her new home. Culture shock is immediate, as well as the oppressive heat. As Caroline settles in to her new world, in her new life, she will learn lessons that will last a lifetime. She will meet people, and learn about a culture that will shake her foundation, and she will meet a boy that she is not supposed to love, but nothing will stop her from loving him anyway.

From the minute the plane touched down, I was fully immersed in this world. I could picture the sights, the sounds, I could feel the heat, so vividly. Trish Doller's writing is so detailed, and so very vivid. All I wanted was to be riding a camel, or sandboarding in the desert. Her characters came to life on the pages, as well. Caroline was a wonderful MC. There wasn't a character in the story that i felt disconnected from. And the romance between Adam and Caroline was as sweet as honey. You hurt for them and root for them all in the same breath, because it is so very obvious, even from the start, how hard their road will be. But it was worth every bit of it!

My one complaint doesn't happen until the last chapter of the book. I feel like this wonderfully detailed story was laid out for us, and then we get to the ending and it was so rushed. That detail that made me fall in love with the book was all of a sudden nowhere to be found. It felt like the author was in love with the story up until the very last chapter, and then just hurried to finish it up. There were so many things I was hoping for from the end of the story, and in the end, I felt let down. Now, none of this means the ending was bad. It wasn't, not even a little bit. It was sweet, and thoughtful, and realistic. I just left craving a little bit... more.

This was my first experience with Trish Doller, but it won't be the last. Her writing left a lasting impression on me, and I can't wait to read another of her stories and hopefully fall in love with it as quickly and easily as I fell in love with In a Perfect World!