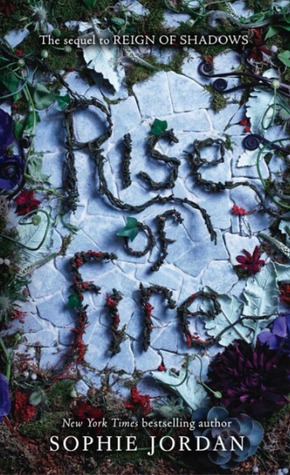 Rise of Fire (Reign of Shadows #2)
By Sophie Jordan
Published on February 7, 2017
Published by: HarperTeen
Source: Around the World ARC Tours

Luna and Fowler have escaped the kingdom of Relhok, but they haven’t escaped the darkness. When a battle against the dark dwellers mortally injures Fowler, Luna is faced with a choice: put their fate in the hands of mysterious strangers or risk losing Fowler forever.

Desperate to keep the one bright part of her life alive, Luna accepts the help of soldiers from a nearby kingdom. Lagonia’s castle offers reprieve from the dangerous outside world—until the king discovers both Fowler's and Luna’s true ties to Relhok and their influence over the throne.

Now pawns in each kingdom’s political game, Luna and Fowler are more determined than ever to escape and build the life they’ve been dreaming of. But their own pasts have a tight hold on their hearts and their destinies. Luna must embrace the darkness and fire within her before she loses not only Fowler, but the power she was destined to inherit.

I really loved Reign of Shadows. It was one of those books that sounded interesting enough, but ended up really taking me by surprise. So when I got the chance, thanks to Around the World ARC Tours, to read and review it's sequel, I jumped at the chance. And boy, am I glad that I did!

Rise of Fire starts off exactly where Reign of Shadows ended, with Fowler giving himself to the Dwellers to save Luna. Luna is not willing to let him go that easily, but even after saving him, Fowler is dying thanks to the Dweller poison. A group of soldiers finds Luna and Fowler and they offer their help to save Fowler, but that means heading to Lagonia, an ally of Fowler's father. It is a risk that Luna is willing to take to save his life. Hopefully, this will not forfeit her own.

I adored these two characters so much in book one and that has not changed a bit. I love their stubborness, their willingness to fight for one another. Their strengths, which are many. Luna is a truly amazing character. I love the fact that she does not let blindness become a weakness, nor does she exploit it for pity. I love how she loves Fowler, but doesn't let him change who she is. Fowler is just a fine specimen of a male. I appreciate the fact that, while he worries for Luna and wants to protect her, he is aware that she is fully capable of caring for herself. The love these two have for one another is a great aspect of the story.

A lot of questions were answered throughout the course of this book, and I really enjoyed the extent of the world-building. The pacing of the story was perfect, and the story was never boring. The added secondary characters all made the story more rich and full, and nobody felt like just a drop-in for added flare.

All in all, this was a great ending to an awesome story. Sophie Jordan is a skilled writer, and I appreciate the way she draws you in before you even realize what is happening. By far, my favorite thing about the story are the characters. Just for Luna and Fowler, I would absolutely recommend this story!