The Weight of Zero 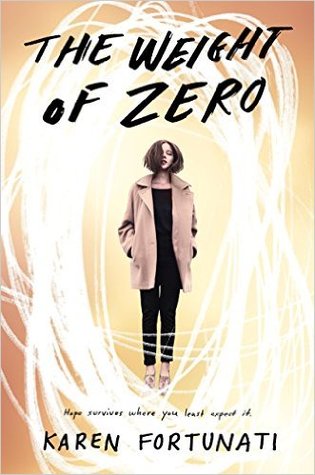 Seventeen-year-old Cath knows Zero is coming for her. Zero, the devastating depression born of Catherine’s bipolar disease, has almost triumphed once, propelling Catherine to her first suicide attempt. With Zero only temporarily restrained by the latest med du jour, time is running out. In an old ballet shoebox, Catherine stockpiles meds, preparing to take her own life when Zero next arrives.

But Zero’s return is delayed. Unexpected relationships along with the care of a new psychiatrist start to alter Catherine's perception of her diagnosis. But will this be enough? This is a story of loss and grief and hope and how the many shapes of love – maternal, romantic and platonic – impact a young woman’s struggle with mental illness.

The manuscript was awarded the 2014 SCBWI Work-in-Progress Grant in the Contemporary YA category, named a finalist in the 2015 Tassey-Walden Awards and won the Serendipity Literary Agency 2013 YA First Page/Novel Discovery Contest.

I was supposed to have this post up hours ago, first thing in the morning, really.  But ever since I finished The Weight of Zero, I'd open up my draft review and then just... stare at the cursor blinking.

With my apologies to the publisher and associated folks who were expecting this review to hit much, much earlier: How do you review a book like this, really, that gets you where you live, you know?

Lots of YA books try to tackle mental illness, from various POVs. Some of them get it right. Some of them are stunningly wrong in their portrayal, ignorant, even if the idea comes from a good place.

Karen Fortunati gets it right. She gets it so very right.

I actually had to stop reading the book several times at the beginning. Like, close the book, blink back tears, and put it away for a while. Read it a chapter at a time, then move on to something else. Cath's honest assessment of "Zero" -- the day her inevitable depressive swing comes back, the day she knows is coming where living will no longer seem worth it to her -- it was so real. Too real, honestly. I saw far too much of myself -- past versions of myself, maybe some future version of myself, who knows; the brain is a fickle thing -- to be able to push on.

Because even though I came out okay on the other side of my own flirtations with "Zero", and even though I assumed by the nature of YA fiction that so would Cath, I still felt my heart in my throat as she calmly, rationally talked about her meticulous plans to get out before her mental illness got her.

Cath's journey throughout this book is outstanding, and she's surrounded by a great cast of characters who help flesh out her world. You can see them all trying, in their own way, to help her, even when she's reticent to admit that anything is even wrong. In a world of YA books with absent or uninterested parents, Cath's mom's love and care for her was palpable, and the warmth of the family of Michael, her love interest, was such a nice change of pace.

I loved the slow development of everyone in the book as they all start to open up in their own time and reveal their secrets. It felt so real in a way that soul-baring confessions between people who have known each other for days could never even pretend to be. Nothing is simple, especially when you're a teenager, and especially when you're a teenager dealing with mental health issues.

If I had any complaint, it's that things wrapped up with too neat of a bow. The resolution of Cath's arc is satisfying, but I probably would have ended it a few pages before the author did, leaving the ending hopeful but more ambiguous.  In a book that hits all the right notes about the "two steps forward, one step back" of mental illness, the ending felt a little hollow. I don't want to criticize it too much -- it's good for someone in Cath's situation to read something like this and think "she was able to manage her illness and have all these things" but I could also see it being a source of frustration: "she's so perfect, I could never have all these things". I don't know what the right answer is, really, but it was something that gave me pause as I read.

One more thing about me, and then I'll go. There's a line at the end of the book when Cath is talking to her therapist and they're discussing how she's doing now. "And," she says, after giving the run down of some recent events, "I'm reading again."

For me, at the worst of my depression, the worst of my moments with "Zero" as an adult, one of the things that bothered me the most -- not the dark thoughts, not crying for no reason in the bathroom or at work or on the bus, not being full of the desire to just never go home again, even when I couldn't completely articulate what that meant -- was the fact that I wasn't reading anymore. Reading was always such a joy for me and at my worst, I couldn't get through a single paragraph, let alone a whole book. Once I got the right combination of doctors and meds under my belt, I knew things were starting on the right path -- yes, when I stopped crying at the slightest provocation, yes, when I stopped wondering whether life was worth it, but also: I was on the right path when I suddenly, all at once, discovered my love of books again,

This is such an important book. As a kid, I didn't have any books like this at my fingertips. I was a pretty well read kid, but if these books were out there, I sure had no way of finding them. I had shelves of books about teenagers dying of cancer, being shipwrecked, going missing, having adventures. I don't think I ever had a book that said "sometimes you will be desperately sad, but there is a way out". Maybe I still would have been too scared to say anything, but at least I would have felt a bit less alone.

Content notes: As can be expected with a book of this subject matter, there's frank talk about bipolar disorder (both depressive and manic episodes), self harm, suicidal thoughts/attempts, eating disorders, bullying, and OCD.