The May Queen Murders
By Sarah Jude
Published on May 3, 2016
Published by: HMH Books for Young Readers
Source: Edelweiss/ RockStar Book Tours

Stay on the roads. Don’t enter the woods. Never go out at night.

Those are the rules in Rowan’s Glen, a remote farming community in the Missouri Ozarks where Ivy Templeton’s family has lived for centuries. It’s an old-fashioned way of life, full of superstition and traditions, and sixteen-year-old Ivy loves it. The other kids at school may think the Glen kids are weird, but Ivy doesn’t care—she has her cousin Heather as her best friend. The two girls share everything with each other—or so Ivy thinks. When Heather goes missing after a May Day celebration, Ivy discovers that both her best friend and her beloved hometown are as full of secrets as the woods that surround them.

The May Queen Murders...


In the Glen, the folks follow the old ways. They have their stories, their traditions. They live among themselves, only mixing with folks from the outside when necessary. There is a story that goes back 25 years, of old Birch Markle. A madman tortured his own sister, killed animals and went on to kill the May Queen. After the murder, he went in to hiding in the woods, where you can hear him screaming every night. After 25 years of nothing but screams, animals are being murdered again. Folks of the Glen take every precaution, including curfews and alarms and patrols, to protect themselves. Because it won't be long before Markle goes after bigger prey.

The May Queen Murders is told from the perspective of quiet and insecure, often stammering Ivy, a teenage girl who loves the old stories and traditions. Ivy's cousin and best friend, Heather, is her complete opposite; carefree and fearless, Heather is like a ray of sunshine. For their entire lives, they have shared stories and secrets, laughter and games, until recently. Now, Heather is pulling away from Ivy, keeping secrets from her, sneaking away at night, even with a murderer on the loose. All Ivy wants is for Heather to be safe, for things to go back to normal with them. But after the first May Queen celebration in 25 years, where Heather is crowned the May Queen, she disappears. Ivy is heartbroken, and can't stop searching for her. Heather's body is only the beginning...

Full of murder and mystery, and a culture that is so very interesting, The May Queen Murders was definitely my kind of story. The characters were wonderfully descriptive, full of personality and uniqueness. The setting of the Glen was intriguing from the get go. I loved the stories, the superstitions, of this group of people. There was a sweet, sweet romance that I was rooting hard for. The story itself was full of sorrow, anger, hope, regret, loss, sadness... but also love and light and friendship. Even though I never thought the murderer was the one pointed to, I was kept guessing until close to the end. And the reveal was full of surprise, shock and anger.

The one negative that I had was with the pacing. In the beginning, and a little towards the middle of the story, it was very slow going. I found myself getting a little frustrated at times, just wanting something to happen. But when the story really got under way, my attention was caught and held. I am very glad that I stuck it out.
I would absolutely recommend this one to anyone who likes a good murder mystery. But if you like a story that never lets up, and keeps your heart racing, I would just warn you that this one is more of a slow burn! 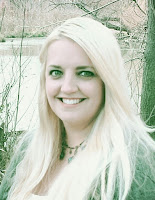 Sarah Jude lives by the woods and has an owl that lands on her chimney every night. She grew up believing you had to hold your breath whenever you passed a graveyard or a bridge spanning water. Now she writes about cemeteries, murder, and ghostly apparitions. She resides in Missouri with her husband, three children, and three dogs.