Showing posts from April, 2016
Show all

Tour Review and Giveaway ~ Keeper of the Mist by Rachel Neumeier

The Keeper of the Mist by  Rachel Neumeier Publisher: Knopf Books for Young Readers Release Date: March 8th 2016 Genre: Young Adult, Fantasy, Fiction Rate: 3 stars Synopsis: A lush new fantasy about finding the will to lead against all odds, perfect for fans of Shadow and Bone. Keri has been struggling to run her family bakery since her mother passed away. Now the father she barely knew—the Lord of Nimmira—has died, and ancient magic has decreed that she will take his place as the new Lady. The position has never been so dangerous: the mists that hide Nimmira from its vicious, land-hungry neighbors have failed, and Keri’s people are visible to strangers for the first time since the mists were put in place generations ago. At the same time, three half-brothers will their own eyes on the crown make life within the House just as dangerous as the world outside. But Keri has three people to guide her: her mysterious Timekeeper, clever Bookkeeper, and stead
Read more

The May Queen Murders By  Sarah Jude Published on May 3, 2016 Published by: HMH Books for Young Readers Source: Edelweiss/ RockStar Book Tours Stay on the roads. Don’t enter the woods. Never go out at night. Those are the rules in Rowan’s Glen, a remote farming community in the Missouri Ozarks where Ivy Templeton’s family has lived for centuries. It’s an old-fashioned way of life, full of superstition and traditions, and sixteen-year-old Ivy loves it. The other kids at school may think the Glen kids are weird, but Ivy doesn’t care—she has her cousin Heather as her best friend. The two girls share everything with each other—or so Ivy thinks. When Heather goes missing after a May Day celebration, Ivy discovers that both her best friend and her beloved hometown are as full of secrets as the woods that surround them.   Goodreads  |  Amazon  |  B&N  |  iTunes The May Queen Murders...    In the Glen, the folks follow the old ways. They have their stories, thei
Read more

The Wrath & the Dawn was one of my favorite's last year. I am so excited to be able to share this release day post and giveaway. Good luck y'all, and happy reading!   Title:  THE ROSE & THE DAGGER Author:  Renée Ahdieh Release Date: April 26, 2016 Publisher:  G.P. Putnam's Sons Books for Young Readers Pages: 432 Formats: Hardcover, eBook, & audiobook Find it:  Goodreads  |  Amazon  |  B&N  |  iBooks  The much anticipated sequel to the breathtaking  The Wrath and the Dawn , lauded by Publishers Weekly  as "a potent page-turner of intrigue and romance." I am surrounded on all sides by a desert. A guest, in a prison of sand and sun. My family is here. And I do not know whom I can trust. In a land on the brink of war, Shahrzad has been torn from the love of her husband Khalid, the Caliph of Khorasan. She once believed him a monster, but his secrets revealed a man tormented by guilt and a powerful curse—one that migh
Read more 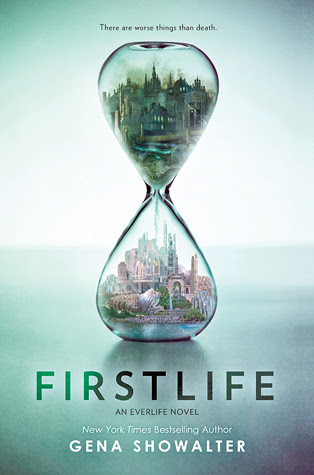 Firstlife (Everlife #1) By  Gena Showalter Published on February 23, 2016 Published by: Harlequin Teen Source: Edelweiss/Around the World ARC Tours ONE CHOICE. TWO REALMS. NO SECOND CHANCE. Tenley “Ten” Lockwood is an average seventeen-year-old girl…who has spent the past thirteen months locked inside the Prynne Asylum. The reason? Not her obsession with numbers, but her refusal to let her parents choose where she’ll live—after she dies. There is an eternal truth most of the world has come to accept: Firstlife is merely a dress rehearsal, and real life begins after death. In the Everlife, two realms are in power: Troika and Myriad, longtime enemies and deadly rivals. Both will do anything to recruit Ten, including sending their top Laborers to lure her to their side. Soon, Ten finds herself on the run, caught in a wild tug-of-war between the two realms who will do anything to win the right to her soul. Who can she trust? And what if the realm she’s drawn to isn’t home
Read more

FOLLOW THE TOUR HERE Bright Blaze of Magic (Black Blade #3) By  Jennifer Estep Published on April 26, 2016 Published by: Kensington Source: FFBC "The characters are as fantastic as Estep fans have come to expect." –  RT Book Reviews Bad Things Always Come In Threes… As a thief, I'm good at three things: hiding in the shadows, getting in and out unseen, and uncovering secrets. I put these skills to work for the Sinclair Family, one of the magical mobs that run the tourist town of Cloudburst Falls.  Everyone knows Victor Draconi wants to take over all the other Families--and kill every last Sinclair. What they don't know is that I'm on to him, and no way will I let the man who murdered my mom get away with hurting all the other people I care about. Especially when I've got places to break into, stuff to steal, and Devon Sinclair fighting right by my side…  "An adventurous ride you will never want to get off." --#1  New York
Read more 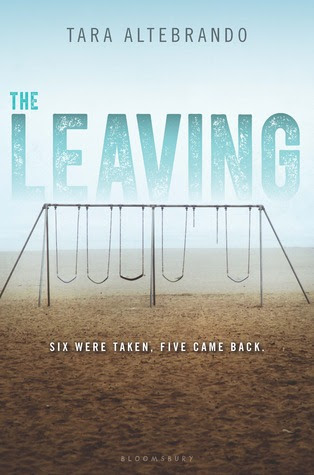 The Leaving By  Tara Altebrando Published on June 7, 2016 Published by: Bloomsbury USA Childrens Source: Netgalley/Around the World ARC Tours Six were taken. Eleven years later, five come back --with no idea of where they've been. Eleven years ago, six kindergarteners went missing without a trace. After all that time, the people left behind moved on, or tried to. Until today. Today five of those kids return. They're sixteen, and they are . . . fine. Scarlett comes home and finds a mom she barely recognizes, and doesn't really recognize the person she's supposed to be, either. But she thinks she remembers Lucas. Lucas remembers Scarlett, too, except they're entirely unable to recall where they've been or what happened to them. Neither of them remember the sixth victim, Max. He doesn't come back. Everyone wants answers. Most of all Max's sister Avery, who needs to find her brother--dead or alive--and isn't buying this whole memory-loss st
Read more

Follow the Tour Here! Love Me Never (Lovely Vicious #1) By  Sara Wolf Published on April 5, 2016 Published by: Entangled: Teen Source: Chapter by Chapter Read the book that  Kirkus Reviews  called: "A complex, witty page-turner, ideal for YA fans of scandal and romance." Don’t love your enemy. Declare war on him. Seventeen-year-old Isis Blake hasn’t fallen in love in three years, nine weeks, and five days, and after what happened last time, she intends to keep it that way. Since then she’s lost eighty-five pounds, gotten four streaks of purple in her hair, and moved to Buttcrack-of-Nowhere, Ohio, to help her mom escape a bad relationship. All the girls in her new school want one thing—Jack Hunter, the Ice Prince of East Summit High. Hot as an Armani ad, smart enough to get into Yale, and colder than the Arctic, Jack Hunter's never gone out with anyone. Sure, people have seen him downtown with beautiful women, but he's never given high school girls t
Read more

Jaime Reviews ~ What the Dead Want by Norah Olson 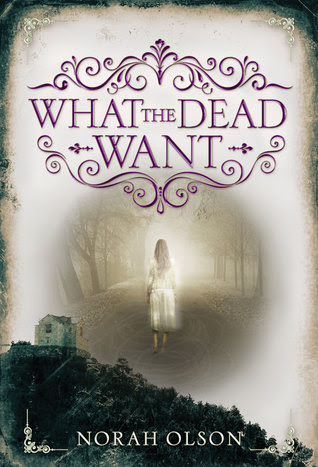 What the Dead Want By  Norah Olson Published on July 26, 2016 Published by: Katherine Tegen Books Source: Edelweiss/Around the World ARC Tours 16 -year-old Gretchen takes photographs to understand the world around her, a passion her mother Mona fostered and encouraged when she was still around. Since her mom disappeared years ago, Gretchen and her dad have lived on their own in New York City, haunted by Mona’s absence. When Gretchen’s great aunt Esther calls unexpectedly to tell her that she has inherited the pre-Civil War mansion on her mother’s side of the family in upstate New York, Gretchen understands nothing except that her aunt needs her help. But what she finds there is beyond her imagination. The house is crumbling apart, filled with stacks of papers and journals from decades, even centuries past, and it’s crawling with rodents. It’s also full of secrets and a legacy of racism and violence so reprehensible that the ghosts of the past are exacting revenge on the liv
Read more 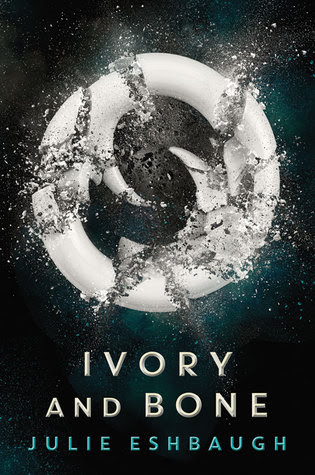 Ivory and Bone By  Julie Eshbaugh Published on June 14, 2016 Published by: HarperTeen Source: Edelweiss/Around the World ARC Tours A prehistoric fantasy—with allusions to Pride and Prejudice. Hunting, gathering, and keeping his family safe—that’s the life seventeen-year-old Kol knows. Then bold, enigmatic Mya arrives from the south with her family, and Kol is captivated. He wants her to like and trust him, but any hopes of impressing her are ruined when he makes a careless—and nearly grave—mistake. However, there’s something more to Mya’s cool disdain…a history wrought with loss that comes to light when another clan arrives. With them is Lo, an enemy from Mya’s past who Mya swears has ulterior motives. As Kol gets to know Lo, tensions between Mya and Lo escalate until violence erupts. Faced with shattering losses, Kol is forced to question every person he’s trusted. One thing is for sure: this was a war that Mya or Lo—Kol doesn’t know which—had been planning all along.
Read more
More posts