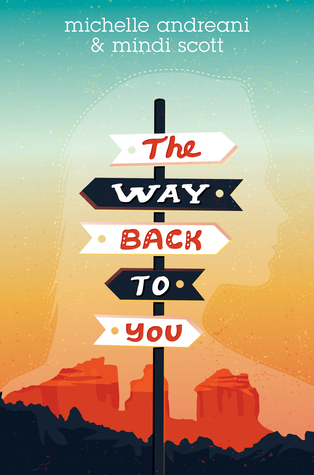 The Way Back to You
By Michelle Andreani, Mindi Scott
Published on May 3, 2016
Published by: Katherine Tegen Books
Source: Around the World ARC Tours

In this witty, heart-tugging novel, two teens take a spontaneous road trip across the Southwest to meet three strangers who received the life-saving organs of their late best friend—charting a journey of loss, hope, and love along the way.

Six months ago, Ashlyn Montiel died in a bike accident.

Her best friend Cloudy is keeping it together, at least on the outside. Cloudy’s insides are a different story: tangled, confused, heartbroken.

Kyle is falling apart, and everyone can tell. Ashlyn was his girlfriend, and when she died, a part of him went with her. Maybe the only part he cares about anymore.

As the two people who loved Ashlyn best, Cloudy and Kyle should be able to lean on each other. But after a terrible mistake last year, they're barely speaking. So when Cloudy discovers that Ashlyn’s organs were donated after her death and the Montiel family has been in touch with three of the recipients, she does something a little bit crazy and a lot of out character: she steals the letters and convinces Kyle to go on a winter break road trip with her, from Oregon to California to Arizona to Nevada. Maybe if they see the recipients—the people whose lives were saved by Ashlyn’s death—the world will open up again. Or maybe it will be a huge mistake.

With hundreds of miles in front of them, a stowaway kitten, and a list of people who are alive because of Ashlyn, Cloudy and Kyle just may find their way to back to her...and to each other.


This book, as are most contemporary "issue" books, was a departure for me. I tend toward the paranormal, the dark, gritty and creepy. Needless to say, this is not that type of book. But something about it grabbed my attention, and so I decided to give it a chance. I am really glad that I did. As I usually am, when I take a step outside of my comfort zone.

The Way Back to You is told in the alternating POV's of Cloudy and Kyle. Cloudy was best friends with Ashlyn, and Kyle was he boyfriend. They both loved her so immensely, it permeated off the pages. When she died from a very freak bike accident, something inside each of them broke. And instead of leaning on each other, they let things from the past keep them apart. They are both slowly drowning, until Cloudy gets this crazy idea... and decides that it is just what she and Kyle both need. What follows is a journey toward healing and friendship, mending broken hearts, healing rifts and finding the way to live with your grief. And it is absolutely beautiful.

Cloudy hides her grief behind a face of happiness. She keeps busy, works hard, but she never lets anyone close. Kyle drowns in his grief, not trying to hide it, and it is destroying the life he thought he would lead. One day, Ashlyn's mom invites Cloudy over and shows her letters from the recipients of Ashlyn's organs. The same day, Kyle goes to a church, looking for something, and finds a little black kitten warming herself on his hood. This is the day that Cloudy finally breaks her silence towards Kyle, and they end up on a road trip, kitten included, looking for healing in the lives of the organ recipients. What starts as an awkward trip, turns into something so much more than they could ever have hoped for.

Cloudy and Kyle were both great characters. They were very realistic. The differences in their grief seemed so true to life. I loved seeing the distance between them slowly dissolve. Matty is Kyle's cousin and Cloudy's ex-boyfriend. He made me laugh every time he was on the page. He was a rock for Kyle, and I loved him for it. Zoe is Cloudy's little sister. Her actions scream how much she loves her sister, and watching Cloudy push her away was painful. When the dam between them breaks, it is a beautiful and emotional thing. There are several characters in the story, such as Ashlyn herself who was such a light even when gone, that played large  and small roles in Cloudy and Kyle's healing. It was a beautiful reminder that no matter how big of a role someone plays in your life, the impact can be enormous.

The Way Back to You is told in several parts, each one representing a recipient. I loved this storytelling style. The dual POV's was a high point for me as well. And Arm, the little black kitten, was one of the best additions to the story. She plays a large part! Characters, awesome writing style, and emotions til the cows come home, this book hit me right in the heart. These two authors have something special, and together, they could be an unstoppable force in the YA world. This is a great story, and even from the girl who likes the dark and creepy, I can easily recommend this book to every single one of you. Thanks to the authors for this beautiful story!