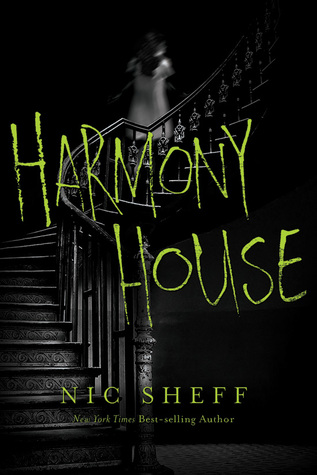 Jen Noonan’s father thinks a move to Harmony House is the key to salvation, but to everyone who has lived there before, it is a portal to pure horror.

After Jen’s alcoholic mother’s death, her father cracked. He dragged Jen to this dilapidated old manor on the shore of New Jersey to “start their new lives”—but Harmony House is more than just a creepy old estate. It’s got a chilling past—and the more Jen discovers its secrets, the more the house awakens. Strange visions follow Jen wherever she goes, and her father’s already-fragile sanity disintegrates before her eyes. As the forces in the house join together to terrorize Jen, she must find a way to escape the past she didn’t know was haunting her—and the mysterious and terrible power she didn’t realize she had.

A classic horror story finds a terrifying home in Harmony House, drawing on favorite tropes and edgy, modern characters to create a chilling tale of blame, guilt, and ghostly revenge.

Add to Goodreads |  Pre-order from Amazon


This review is not going to be a long one. I honestly don't have much to say about it. I am a huge fan of horror, and when I saw this one I was excited about it. It looks and sounds like it would be a great horror story, but it turned out to be nothing like what I was hoping for. And it left me sorely disappointed.
My first complaint started almost immediately, with the main character Jen. She is angry at the world, for her mother dying and her father moving them to the middle of nowhere. I understand her anger, but she is ridiculously cold-hearted. I couldn't connect with her even a little, and her actions almost always made me sick. It is a hard thing, to feel for a character and not like her all in the same breath. Her father was not a father at all, and definitely a weird and creepy man. These two certainly made for a hard to read story.

The story itself could have been a good one, but there were so many missed opportunities. There were places in the story that I felt like something was about to happen, but then all the momentum was ripped away. The best part of the book were the flashbacks, and even those never really held my interest.

I am not entirely sure why I continued reading all the way to the end. I think maybe I was hoping that something awesome would happen, but that something never came. All that happened was unanswered questions. I really dislike having to write negative reviews, but this book just wasn't for me.