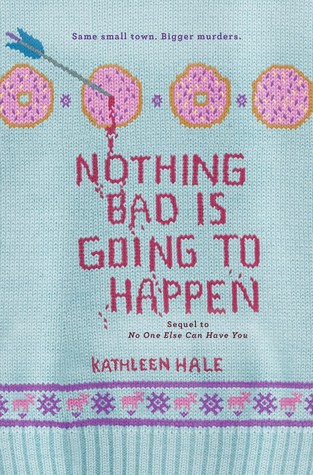 Nothing Bad is Going to Happen (No One Else Can Have You #2)
By Kathleen Hale
Published on January 5, 2016
Published by: Harper Teen
Source: Around the World ARC Tours

Teenage sleuth Kippy Bushman is back in this murderously funny sequel to No One Else Can Have You, which was named a Time Magazine Best Young Adult Book of the Year.
Just when you thought it was safe to go back to Friendship, Wisconsin...
After catching her best friend’s murderer a few months ago, Kippy thought the worst was over. Then she found her boyfriend at home, barely breathing and clinging to life. The sheriff insists it was a suicide attempt, but Kippy refuses to believe it. Given everything that’s happened to her, she wonders if something more sinister is going on. Without any evidence, no one will listen to her—except maybe her former nemesis. But in a town where everyone has their secrets and a next-door neighbor could be a serial killer, you take all the help you can get.
Even more shocking and thrilling than its critically acclaimed predecessor, Nothing Bad Is Going to Happen is another clever, riotous dark comedy from Kathleen Hale that finds the perfect balance between the humor and horror.

Nothing Bad is Going to Happen...

Yeah, that is a total lie where our returning heroine is concerned! Kippy Bushman is back, and as weirdly awesome and inappropriately humorous as before. And just as before, I just can't help rooting for her! I am happy to see that Kathleen Hale has kept her oomph from book 1, and carried it into book 2. If she had lost that crazy, then this series would lose its appeal!

Kippy and Davey are back together, and have a big night planned. Kippy is finally having her cast removed, her last hurdle to recovering from her near death at Ralph's hands. Unfortunately, things go awry... again, when she shows up at Davey's house that evening and finds Davey unconscious on the floor, surrounded by beer bottles and pills. Everyone says he tried to commit suicide, but Kippy knows better. With the help of her new friend (kind of), Libby, and several new and old friends, Kippy becomes detective for the second time. This time, there will be more danger than ever before.

I really, really enjoyed this story! It was fantastic from beginning to end. Kippy is a fun character, and I cannot help but love her. She is sarcastic, and weird and strange and it makes her a fascinating character to get to know. We also get to know Libby in this story, and she turns out to be a loyal friend and awesome detective partner. Star players from the first book make repeat appearances in the sequel, and we get to know them better than before. Each character in the story undergoes some serious character boosts. Dommy and Ms. Rosa, Libby, Sheriff Stakke, Cole. Each one of them plays an important role in the story. Even Sir Albus makes appearances, some real and some imagined.

The pacing of the story is perfect. Fast-paced and entertaining. It kept me on the edge of my seat, trying to figure out who did it. The characters make the story even better. I know that there has been drama surrounding this author, but don't let that stop you from picking up this entirely unique series. Kathleen Hale knows how to write, and her stories are compelling and draw you in before you realize whats happening. And the ending to this sequel will have you breathless to get the final book in your hands!

Thank you to Around the World ARC Tours for allowing me to review this book!