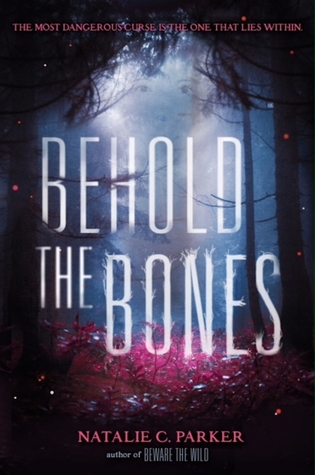 Behold the Bones (Beware the Wild #2)
By Natalie C. Parker
Published on February 23, 2016
Published by: HarperTeen
Source: Around the World ARC Tours

Candace “Candy” Pickens has been obsessed with the swamp lore of her tiny Louisiana town for . . . forever. Name any ghostly swamp figure and Candy will recite the entire tale in a way that will curl your toes and send chills up your spine.
That doesn’t mean Candy’s a believer, however. Even though she and her friends entered the swamp at the start of summer and left it changed, Candy’s the only one who can’t see or feel the magical swamp Shine. She’s also the only one who can’t see the ghosts that have been showing up and spooking everyone in town ever since. So Candy concentrates on other things—real things. Like fighting with her mother and plotting her escape from her crazy town.
But ghosts aren’t the only newcomers in Sticks, Louisiana. The King family arrives like a hurricane: in a blur and unwanted—at least by Candy. Mr. King is intent on filming the rumored ghostly activity for his hit TV show, Local Haunts. And while Candy can’t ignore how attracted she is to eighteen-year-old Gage King and how much his sister, Nova, wants to be friends, she’s still suspicious of the King family.
As Candy tries to figure out why the Kings are really in town and why the swamp that had previously cast her aside now seems to be invading every crack in her logical, cynical mind, she stumbles across the one piece of swamp lore she didn’t know. It’s a tale that’s more truth than myth, and may have all the answers . . . and its roots are in Candy’s own family tree.


Beware the Wild was Sterling's story, and her fight to bring her brother back to her. In Behold the Bones, it is Candace Pickens time to shine... but shining in Sticks is the last thing she wants. Unfortunately, what we want isn't always what we get and Candy is about to learn that in the strangest way possible.

Candy doesn't see things in the swamp the way others do. She doesn't see the Shine that her best friends Sterling and Abigail see... and she definitely doesn't see all the haint's that everyone in town are swearing they see coming out of the swamp. And she absolutely, most definitely doesn't believe in the supposed curse that her family has. All Candy wants is to get through high school and get out of Sticks, away from the swamp and her families "curse." She is tired of being the only one who can't see Shine, and the looks that her best friends share when they are talking about it. When she makes the decision to go into the swamp and try to change things, she wakes something up. And all those things that Candy doesn't believe in? Well, she might have to start believing soon because she is the only person in Sticks who can make things right again. But what will it cost her?

The King family has moved to town, and they intend to film the town of Sticks and it's swamp, for a ghost show. Candy isn't at all happy about this, but the rest of the town is excited to have their little town spotlighted. While everyone else is falling in love with the King family, Candy is wary. And it turns out, she has the right to be. Something is not right about this family. They have an ulterior motive. And regardless of how Candy feels about Gage King, she won't stop until she learns the truth. Unless Nova King stops her from figuring things out until it is too late!

I LOVE Candy Pickens! She is outspoken and forthright, sarcastic and witty and fierce and strong. She was an awesome main character, and a character that I fell in love with and rooted for from beginning to end. She isn't perfect by any means. She has a tendency towards a bad attitude, and sh definitely speaks before she thinks sometimes. But she always does what she can to make things right, and she does everything she can for the people that she loves. Sterling and Abigail are back in this story, and they are the ultimate best friends. They are the exact opposite of Candy, and each other, but they all work together and come together in the best ways possible. Sweet and gentle and always loyal, Sterling is the tiny peacekeeper. Abigail "Beale" is level-headed and calm, and stands strong no matter what. I love these characters! We also meet Candy's cousins, who are comedic relief in the story, and always made me smile when they showed up. There is also a surprising love interest, and I completely shipped it by the end!

Once again, Natalie C. Parker has brought the swamp to life. Even more so than in Beware the Wild, the swamp comes alive and becomes its own living and breathing character. The swamp holds stories of it's own, and we learn more about those stories. This author has shown such growth in every aspect of this companion novel, from the amazing characters to the excellent world-building. Her writing draws you in to the story, and the plot and it's pace keep you invested, sinking deeper into the town of Sticks and all of its secrets and legends. I am happier than I can say that Behold the Bones is a reality, and I am hoping that someday soon we will hear news of another companion to this awesome series. There is one more character who deserves her own day in the sun, and I hope we see her story one day soon!

Thank you so much, as always, to the amazing Around the World ARC Tours! You rock!