Blog Tour ~ Death Becomes Me (Call Me Grim #2) by Elizabeth Holloway ~ Review by Jaime and Giveaway! 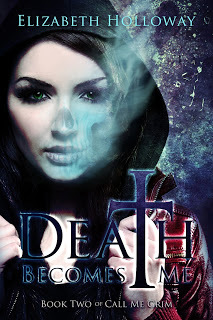 Libbi and Aaron are Grim Reapers on the run. They may have escaped their hometown of Carroll Falls unscathed, and are together and alive (well, more or less), but they’ll soon find there’s a price to pay. A deadly one.By escaping Carroll Falls, Libbi and Aaron have broken the Reaper’s covenant with Abaddon, aka Death himself – and now they’re right at the top of Abaddon’s Most Wanted list. There’s nowhere to hide, and not a single person, alive or dead, they can turn to for help.But just as it's looking like the end of the line, Libbi hears word of a Reaper in hiding – a Reaper who once escaped Abaddon's wrath. Finding this mysterious Reaper might be the perfect solution… if Death doesn’t find them first.

The truck should have turned Libbi Piper into a Libbi Pancake—and it would have, too, if Aaron hadn't shown up and saved her life. The problem? Aaron's the local Grim Reaper . . . and he only saved Libbi's life because he needs someone to take over his job. Now, Libbi has two days to choose between dying like she was supposed to, or living a lonely life as Death Incarnate. Talk about a rock and a hard place. And the choice goes from hard to sucktastic when her best friend shows up marked: condemned as a future murderer. Libbi could have an extra week to stop the murder and fix the mark . . . but only if she accepts Aaron's job as Reaper, trapping herself in her crappy town forever, invisible and inaudible to everyone except the newly dead. But, if she refuses? Her best friend is headed straight for Hell.


Death Becomes Me was a great sequel to one of my favorite grim reaper stories! Picking up immediately after the lightning fast ending of Call Me Grim, we follow Libby and Aaron as they try to stay one step ahead of Abbadon. With romance, adventure, thrills and secrets, Death Becomes Me hit a high note, just like it's prequel!

Libbi and Aaron have escaped from Carrol Falls, leaving Kyle behind as the new Reaper. It won't be long before Abaddon, Death Himself, realizes they have escaped and come after them. As time seems to be running out, they learn something that could be the difference between their life after death, and Death Himself.

Libbi was an awesome character in the first book, and she is just as awesome in book 2! I love that she has a sarcastic attitude, but she also has a good heart. I hurt for her, knowing that she left everyone behind, but she didn't let it keep her down. She is a tough cookie. She is a teen MC, no doubt, but she seems more true to life than some MC's that i have come across lately. Aaron appealed to more in this book than the first. He grew a lot more as a character, and I saw more of the flashes of depth that we had in Call Me Grim. Libbi and Aaron's relationship was a great part of this story. They grew together, and held on to each other, and leaned on each other. They kept each other going, and that was awesome to see.

The settings, the plot, the new characters that we meet during the story, the action and adventure, the fantastic writing... All of it added up to a truly great story that I am happy to have read. Death Becomes Me goes from fun and flirty, to down and dirty, to thoughtful and emotional with such ease. I was fully invested from the moment Aaron and Libbi escape the barrier to the very end... Which I won't tell you about, but it was good! You just have to read it for yourself!

Elizabeth Holloway is a writer of young adult fiction living in Southern Pennsylvania with her two teen children and their growing number of pets.

In addition to writing, she is a registered nurse, an avid reader, an out-of-practice artist, a karaoke singer, and music lover. She is still trying to decide what she wants to be when she grows up.