It's a Wonderful Death
By Sarah J. Schmitt
Published on October 6, 2015
Published by: Sky Pony Press
Source: YA Bound Tours

Seventeen-year-old RJ always gets what she wants. So when her soul is accidentally collected by a distracted Grim Reaper, somebody in the afterlife better figure out a way to send her back from the dead or heads will roll. But in her quest for mortality, she becomes a pawn in a power struggle between an overzealous archangel and Death Himself. The tribunal presents her with two options: she can remain in the lobby, where souls wait to be processed, until her original lifeline expires, or she can replay three moments in her life in an effort to make choices that will result in a future deemed worthy of being saved. It sounds like a no-brainer. She’ll take a walk down memory lane. How hard can changing her future be?

But with each changing moment, RJ’s life begins to unravel, until this self-proclaimed queen bee is a social pariah. She begins to wonder if walking among the living is worth it if she has to spend the next sixty years as an outcast. Too quickly, RJ finds herself back in limbo, her time on Earth once again up for debate.

RJ is a snarky, unapologetic, almost unredeemable, very real girl. Her story is funny and moving, and teens will easily connect with her plight. Prepare to meet the Grim Reaper, who’s cuter than you’d expect; Hawaiian shirt–wearing Death Himself; Saint Peter (who likes to play Cornhole); and Al, the handler for the three-headed hound that guards the gates of Hell. This cast of characters accompanies RJ through her time in the afterlife and will do their best to gently shove her in the right direction.


What a wonderful, quirky, surprising story this was! I really enjoyed reading this little gem of a story, and I am looking forward to reading more from Sarah J. Schmitt!

RJ was an awesome MC. I loved her voice. She was a true teen, a terrible one at that when she was alive. She made horrible choices, even when she knew they were wrong. She hurt people that she cared about for the sake of staying popular. But she had heart, and you could feel it. Even more so as the story progressed. I loved her backbone, that she refused to just accept her fate, or take no for an answer. And the best part about her was her willingness to recognize the wrongs that she had done, and her true desire to make things right. She was a character I rooted for from the get-go!

Sarah J. Schmitt has created an world that I found endlessly fascinating. There were so many aspects to it, and each place that RJ visits in the story is very unique, and intriguing. The arrivals and departure trains, the receiving room and the viewing room. The different levels, the routes the characters take. The courtrooms, the 3 headed dogs guarding the gates of hell. It was a world I would gladly visit again, and I give major kudos for it's creation!

Every single one of the secondary characters had a role to play, from RJ to her Reaper to Death Himself and everyone in between. There were so many fantastic people wrapped up in this 320 page book, and they were perfectly written. From the ones that I loved to the ones that I loathed, each one added another element, another layer to the story. The characters absolutely made this story! Look out for the two playing Cornhole!

From the characters to the world-building, to the lessons wrapped up in a light-hearted package, Sarah has written a book that can and will be enjoyed by people both young and young at heart. The ending will throw you for a loop, and might bring some tears to yours eyes (maybe lots of them), but it was the only way the story could have ended. I am such a huge fan of this book, and I am so glad that I was able to be a part of the tour so that I can hopefully talk some people into giving it a try! 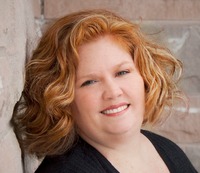 Sarah J. Schmitt is a K-8 school librarian and Youth Service Professional for Teens at a public library who, in addition to planning a variety of events, enjoys opening up the world of books to reluctant readers. She runs a teen writing program that combines Skype visits from well-known authors and screenwriters and critique group style feedback.

Prior to immersing herself in the world of the written word, Sarah earned her Masters of Science in Higher Education Administration and Student Affairs from Indiana University where she worked with first year college students as they acclimated to college life. Sarah lives outside of Indianapolis with her husband, two kidlets and a cat who might actually be a secret agent. She is an active member of SCBWI, ALA and the Indiana Library Federation and is a regular participant at the Midwest Writer's Workshop. Her debut novel, IT'S A WONDERFUL DEATH, comes out Fall 2015 from Sky Pony Press.