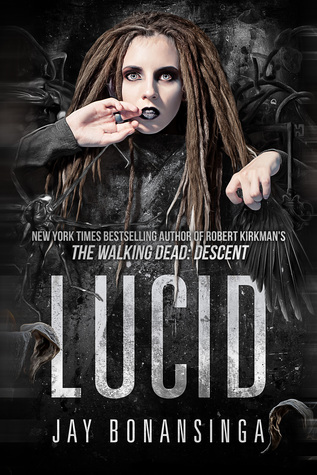 Lori Blaine is not your average seventeen-year-old high school student. Cool and iconoclastic in her dread-locks and natty thrift shop garb, with an IQ that's off the charts, she is the ersatz leader of a pack of Goth kids that circle around her in the halls of Valesburg Central like a school of pilot fish. Lori speaks softly, but when she does speak, people have a tendency to listen.

But Lori Blaine has one problem: The door.

Lori's dreams are haunted by this strange, recurring symbol. The door is always there on the periphery... beckoning to her, daring her to see what might be waiting for her on the other side. Finally, at the urging of an overzealous school psychologist, Lori Blaine decides to face her fears. The next night, she goes through the dream door... and immediately plunges into a shattered looking glass world in which nothing is as it seems and evil awaits around every corner.

But when Lori fights back, all hell breaks loose.

Created by the New York Times bestselling author of THE WALKING DEAD: DESCENT...LUCID is a mind-bender of a contemporary supernatural thriller for Young Adults.

My thoughts on Lucid:

I am going to try and keep this review short and as sweet and positive as possible. But I have to go ahead and put it out there that, though I enjoyed the idea behind this story, I feel like it missed the mark in a lot of ways. I was looking forward to diving into Lori's dreams, and maybe getting spooked a time or two, but I ended up being bogged down in the mire and never quite being pulled out of it.

The story starts with an extremely tired Lori in the office of the school psychologist who is very persistent with her. He wants to know about her dreams, and finally just to get him to stop talking, she tells him about the Door. The Door has been in her dreams for years, but it scares her and she ignores it as much as possible. The psychologist suggests to Lori that she stop ignoring it, face her fears, and go through the Door, and hopefully she will beat the fear and get some sleep.

So Lori ends up going through the Door, and into a world of darkness, branching tunnels, and Bogy's, where she meets several other people who seem to be sharing her dream. It is here she learns the true meaning of being a Lucid dreamer, and figures out what her purpose of being a "Lucie" is. She learns what powers a Lucid holds over dreams, and she is given a puzzle to figure out about herself. Once she figures this puzzle out, she has the chance to make a huge difference in the fight against the dark side.

My issue with Lucid lies with the writing more than the story. There seemed, to me, to be so much story that should have been edited out, could have been edited out, and the pared down story could have been worlds better. There was so much extra information, or unnecessary paragraphs, and it very much weighed the story down for me. I was looking forward to story of dreamworlds, and while we do get a bit of one, it is always the same one. And the focus was taken off of being a Lucid dreamer and thrown into a story about the fight between Lucies and demons pretty quickly. It was a little disappointing, but even this storyline could have been made much better with some serious editing.
As far as characters went, Lori was a decent character. There was a lot of focus on her being Goth with dreadlocked hair and a genius IQ, but we weren't really shown that through her characterization. It was definitely a big time case of telling vs. showing, and it made it less believable. In Lori's credit though, she was a tough chick which I appreciated. The rest of the characters in the story, including the insta-love interest Nick, fell very flat. Nick was the least flat, but he was basically there to be Lori's love interest, and that was his role. The other characters, like Lori's best friend Hugo, were all very bland characters. I never felt a pull towards any of them, which made the emotional connection I look for pretty much null.

I really, really dislike writing negative reviews. It makes me feel terrible, and sick to my stomach. But sometimes, we all have to do it, and I would rather be honest about it than mislead someone. I genuinely hope that, if this book interests you, you will give it a fair shot. On a positive note, that cover is AWESOME!