When the glass slipper just doesn’t fit…
The tale of Cinderella has been retold countless times. But what you know is not the true story.
Pin has no recollection of who she is or how she got to the Godmother’s fortress. She only knows that she is a Seamstress, working day in and out to make ball gowns fit for fairy tales. But she longs to forsake her backbreaking servitude and dares to escape with the brave young Shoemaker.
Pin isn’t free for long before she’s captured again and forced to live the new life the Godmother chooses for her—a fairy tale story, complete with a charming prince—instead of finding her own happily ever after.
Sarah Prineas’s bold fairy tale retelling is a dark and captivating world where swords are more fitting than slippers, young shoemakers are just as striking as princes, and a heroine is more than ready to rescue herself before the clock strikes midnight.


.... Very different. The beginning took some getting used to, but once I found my rhythm and started getting to know the characters, the story became more enjoyable. It isn't a story that makes sense from the beginning. It takes time to start understanding whats happening, and the reasons behind everything. While I had some issues with the story, it was definitely worth the read!

The story starts with a girl being told to sew. The girl is Nothing. So she sews. But one day, during the middle of sewing with the other Seamstresses, the guards take everyone outside and she witnesses her first flogging. A boy about her age, tied to the post. After, she stops being Nothing. She starts talking for the other Seamstresses, and becomes the foot model for the Shoemaker. During their conversation, she names him Shoe and he gives her the name Pin. Pin tells Shoe that she is leaving, escaping, and she wants him to come. He says no, but she is leaving anyway. Pin starts planning her escape, in earnest after another Seamstress dies trying, and then the story starts to pick up pace. And we slowly get answers.

Pin is a good character. Very interesting. She is determined, and strong. She is sure that there is something out there. A Before. I enjoyed her and Shoes interactions. They both showed growth throughout the story. One of the issues I did have though was the MAJOR case of insta-love between these two. Major. But I was able to look past it, and just enjoy their scenes.

The story is full of characters who all have the same name. All of the seamstresses are Seamstress, the Jack of all Trades are Jacks, and so on. It was a cool concept, and I liked it. It was interesting to see all of these characters with the same name that has distinct personalities. The different fairy tales that made an appearance in the story was also a favorite part.
After the first half, the story loses a little bit of oomph. That is the other reason why this one wasn't perfect for me. The momentum dropped, and my interest would wane, here and there. It was very up and down, but the author brought the ending around and I finished the book satisfied. It was left open enough that there might be the chance for a sequel, but if there isn't it would be alright.

All in all, I did enjoy Ash & Bramble. It was very cute and quirky, with a good cast of interesting characters, and fairy tales woven throughout. I truly enjoy Mrs. Prineas' writing style, and will be more than happy to read whatever she comes up with next!

Thanks to Rockstar Book Tours for giving me a spot on this awesome tour! 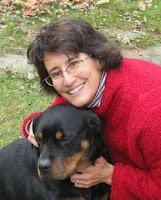 Hi there! I'm Sarah Prineas, author of the Magic Thief series published in the US by HarperCollins and in 17 other languages around the world, and the Winterling trilogy. I live in rural Iowa with my mad scientist husband, two kids, and two cats. My next book is called Ash & Bramble, and it's a YA.
Here's my website: