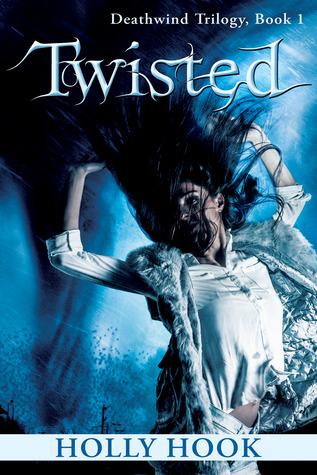 This novel will be released on December 15, 2013. Sixteen-year-old Allie isn’t like other girls. Instead of spending her summer break sitting around on the beach, she takes the epic vacation of a lifetime.Tornado chasing.And she’s not disappointed. Just a few miles from the town of Evansburg, Nebraska, Allie meets her dream of seeing a tornado. In person. She can’t wait to tell her friends back home. Never mind that her parents are going to kill her.But her dream soon turns into a nightmare, and a strange event leaves her shocked. Confused. When she returns home to Wisconsin, something’s…different. Allie now bears a curse so awful, it could destroy everyone and everything she’s ever known.With her best friend, Tommy, Allie must return to the plains to find a way to reverse it. She enters a world that she had never imagined, where she becomes a pawn in a fight to save the people of Evansburg from her fate…or to destroy them.

These people aren't saving me after all.
They're kidnappers.
There's no other reason for this.  They must be psychos like those mutant hillbillies from that one movie.  The barn's going to be full of jars of eyes and noses and all sorts of sharp, scary farm tools.
"What are you doing?" I yell, hoping that someone, anyone can hear me way out here.  My throat burns with the force of my screaming.  “Did you see anyone else where you found me?”
The barn blocks out the sun and I'm in darkness.
“Uncle Cassius!”
There’s no light except for pinpricks that shine through the old walls and a circle of blue sky at the peak of the barn's roof.  I blink and my eyes adjust.  The floor's clean, perfect concrete.  All the hay’s been swept up against the walls.  No bloodstains.  It doesn’t reassure me as much as I want, though.
"Lay her down," the woman orders.  It's clear she's in charge here.
They lift me higher.  The roof gets closer for a second.  They move me to the side and set me back down.  My back meets a table with a cloth on it.  Or a slab.  I’m not sure.  I’m still looking up.  The woman keeps her grip on my arms, pushing down tight enough to keep me from breaking away.  The man does the same with my ankles.  They’re holding me down to some kind of altar or something.  The hole in the ceiling lets a beam of light down.  It lands on my chest, forming a ring of light on my new Wild Weather Chase Tours T-shirt.  Or is it a target?
I bite my lip, keeping the screams in.  I can't let them know I'm scared.  It's what psychotic people want when they do this stuff.  I have to keep my cool and find a way out of here.
"Okay," I say, trying to collect myself.  "Why are you holding me here?  In case you haven't noticed, I just survived a tornado and my uncle's missing.  I want some answers."

The woman looks down at me, keeping her elbows locked and holding down my arms.  She's strong, way stronger than she should be, and her face is smooth and sharp in a way that's borderline creepy.  It almost looks like a mask.  "You're about to join the family that you've always wanted."

Holly Hook is the author of the Destroyers Series, which consists of five young adult books about teens who are walking disasters...literally. She is also the author of the Rita Morse series, a young adult fantasy series still in progress, and After These Messages, a short ya comedy. Currently she is writing Twisted, a spin-off of the Destroyers Series due out in December. When not writing, she enjoys reading books for teens, especially ya fantasy and paranormal series with a unique twist.