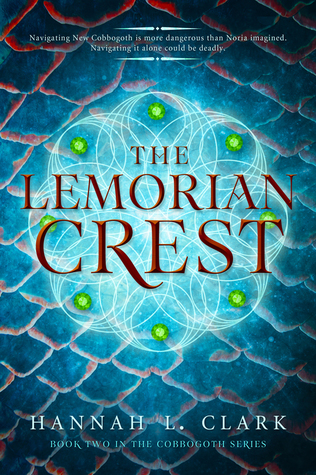 After being raised from infancy in Boston, Mass., Noria (a.k.a Norah Lukens) has no idea what to expect upon entering New Cobbogoth, where she never would have guessed that paths of light can make you vanish; doors can lead to realms both near and far; myths and legends are actual history; a mere kiss can seal two souls as one; and, of course, a stone is never “just a stone.” Her Uncle Jack’s stories never could have prepared her for the magical and dangerous place her native realm is turning out to be.
When the Gihara’s promises begin to crumble, her best friend and soul-mate Jamus (a.k.a. James Riley) is in more danger than ever. Then when his father Lylend abandons her to search for an ancient relic called The Lemorian Crest and she is taken captive by the very people she’s risked everything to save, Noria begins to lose faith in the Cobbogothian gods and the mission they sent her home to accomplish.
Only when a series of new friendships and loyalties are forged in the most peculiar of places, does Noria dare hope again. Hope for Jamus’ safety, for their future together, and for the survival of the entire Cobbogothian race.
Book 1: Uncovering Cobbogoth was published in 2014 by Cedar Fort Publishing.

And the story goes...


When I read Uncovering Cobbogoth last year, I wasn't at all sure what to expect, and I dang sure didn't expect to love it. But love it, I did, and I (very) impatiently waited for the sequel. And I can say, now that I have read it, it was oh so worth the wait!

The mythology of the Cobbogoths that Hannah has created is one that I am very in awe of. The world-building, the culture, everything that she has created for this series blows me away. Her brain works in marvelous ways, and I am so glad that I took a chance on this author and her first novel because it was a great chance to take!

In The Lemorian Crest, Norah is thrown for loops, betrayed, her faith and trust in people questioned. James, her love, is in trouble. Even when things weren't great between them in book 1, James and Norah's relationship was one that I rooted for. James is a sweetheart, and so willing to stick his neck out for Norah. And Norah has been exceedingly forgiving of James. Their relationship was something special in this book, even when things weren't going well. Norah was a fierce character in this second book. I loved her in the first one, and even more in book 2. She is strong, capable, and fiercely loyal to the memory of her Uncle Jack. That is an awesome thing. We meet more characters in this book, and each one added another element, even more life, to the story. Whether good, bad or in-between, each one is written distinctly, and individually. Characters are a knock-out, for sure!
Hannah L. Clark has a wondrous imagination, and serious writing skills to back it up. Cobbogoth, her creation, is one of a kind. I am so glad that I started on this journey, even reluctantly. Now, I am anything but reluctant to continue it. And I cannot wait to see what is next in the world of the Cobbogothians.

Thanks to YA Bound Book Tours for letting me be a part of the tour!

Hanna L. Clark lives with her husband and two children in the Rocky Mountains. She has always know she would be a storyteller. In 2006 she graduated Utah Valley University with a bachelor's degree in English and immediately began writing her first novel.

Uncovering Cobbogoth was Clark's first book in the seven book Cobbogoth series based on her mythological brain-child, the Legend of the Cobbogothians. It was released in May 2014 through Cedar Fort Publishing. Book 2 in the series will be released in Summer 2015.

Clark loves running, mythology, singing while playing the guitar, herbal tea, escaping into imaginary worlds, and being with her peeps. Like her heroine Norah, she also kinda believes that trees might have souls, but must clarify that she has never actually hugged a tree. The closest she has ever come to that kind of bizarre behavior was the time she hugged the pillars outside Harry Potter Land. Which, all things considered, is not bizarre at all if you take into account how exquisitely happy she was to finally be there. :)