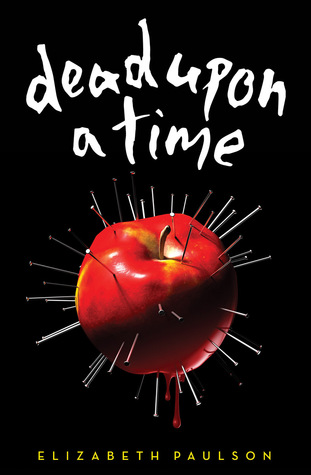 Dead Upon a Time
By Elizabeth Paulson
Published on August 25,2015
Published by Scholastic Press
Source: Edelweiss

It's a fairy-tale nightmare . . .
One girl is kept in a room where every day the only food she's given is a poisoned apple. Another is kept in a room covered in needles -- and if she pricks her finger, she'll die. Then there are the brother and sister kept in a cell that keeps getting hotter and hotter. . .
A sinister kidnapper is on the loose in Kate's world. She's not involved until one day she heads to her grandmother's house in the woods -- and finds her grandmother has also been taken. Already an outcast, Kate can't get any help from the villagers who hate her. Only Jack, another outsider, will listen to what's happened.
Then a princess is taken, and suddenly the king is paying attention -- even though the girl's stepmother would rather he didn't. It's up to Kate and Jack to track down the victims before an ever after arrives that's far from happy.


You can't really go wrong with fairy tale retelling's, and when you have a story that is a big old mixing bowl full of them? Well, chances are pretty good that I am going to like that mixing bowl of a book a lot. Dead Upon a Time is a fantastic...well, mixing bowl. (Mixing bowl? Really, Jaime)

I wasn't quite so sure right at the beginning that I was going to be able to get into the story, but then... the adventure starts! Once I started recognizing more fairy tale elements, I really became more involved in the story and had a great time. The best way to describe Dead Upon a Time is that it is one heck of a fun read! Yes, there are some darker moments, but Eliaabeth Paulson is great in bringing out the humor, and lightening things up when they start getting intense. Even as a reader who loves the dark and creepy (have I mentioned that before?!), I love a great sense of humor, and there were moments where I couldn't help but laugh out loud.

Kate and Jack are such good, relate-able characters. Jacks sarcasm is wonderful, and I love Kate's determination and her strength. They are both village outcasts, ready to be persecuted, when they are brought before the King, and asked to find his beloved daughter. Surprised, but willing, they set out on a journey that will take them to some interesting places. They meet trouble along the way, as is pretty much the basis of a fairy tale, and learn some terrible truths. I had a great time going on this quest with them!

Filled with adventure, evil and good, glimpses of some of the best fairy tales out there, Dead Upon a Time was a wonderful read! Elizabeth Paulson has a knack for world-building, and the writing skills to make it even better. While I think the story might be geared towards younger youngin's than myself, even the ye old adults will have a good time. And just look at that cover, would ya?!

Elizabeth Paulson lives on the edge of the woods somewhere in America.