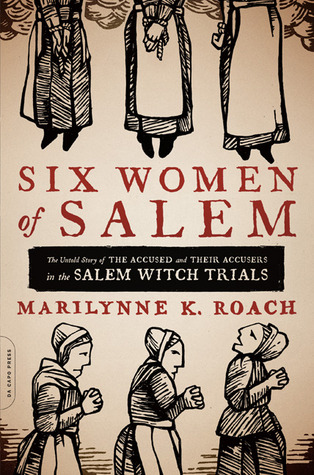 Six Women of Salem: The Untold Story of the Accused and Their Accusers in the Salem Witch Trials
By Marilynne K. Roach
Published on September 3rd 2013
Published by Da Capo Press
Source: Purchased

Six Women of Salem is the first work to use the lives of a select number of representative women as a microcosm to illuminate the larger crisis of the Salem witch trials. By the end of the trials, beyond the twenty who were executed and the five who perished in prison, 207 individuals had been accused, 74 had been "afflicted", 32 had officially accused their fellow neighbors, and 255 ordinary people had been inexorably drawn into that ruinous and murderous vortex, and this doesn’t include the religious, judicial, and governmental leaders. All this adds up to what the Rev. Cotton Mather called "a desolation of names."

The individuals involved are too often reduced to stock characters and stereotypes when accuracy is sacrificed to indignation. And although the flood of names and detail in the history of an extraordinary event like the Salem witch trials can swamp the individual lives involved, individuals still deserve to be remembered and, in remembering specific lives, modern readers can benefit from such historical intimacy. By examining the lives of six specific women, Marilynne Roach shows readers what it was like to be present throughout this horrific time and how it was impossible to live through it unchanged.


Yes, yes, this isn't the type of book normally reviewed here, but I invested a lot of time in reading this and figured I could blog about it, for the maybe five other history nerds out there.   I picked up this book a while ago for two reasons: first, I'd been enjoying the TV show Salem, which is awful, totally guilty-pleasure TV, but uses some of the real people of the Salem witch trials as bases for characters.  And second, I've been working on a project of my own that required some basic knowledge about this time period, so, here we go!

If you're not a history buff or overly interested in this time period, this book may be a bit too dense.  The beginning is slow going as we learn the backstories of the six women that author Marilynne Roach focuses on. It's important information, because a lot of what happened during the witch trials was spurred on by old rivalries and grudges between families in Salem, but it's still a little difficult to get through.  There are a lot of people and connections to remember, and sometimes I wished I had some sort of flow chart or relationship tree to keep it all straight.   I did enjoy the fact that the focus was spread out among different sorts of people -- some of the women were accused and convicted as witches, some were the accusers, and all of them are treated fairly and with respect by Roach.

Roach weaves factual text in with her own fictionalized ideas about what the women may have been thinking and experiencing at the time. The fictionalized text provides nice bookends for each section of the book, but for me the real draw was the details of what happened during this period in history.  Seeing how the whole village got caught up in the paranoia over witches was fascinating, and a little bit scary, to read.  Roach uses actual historical texts, including court transcripts, letters, etc., to build her story, quoting frequently from the source documents in building her narrative, which I found fascinating -- court transcripts are especially fascinating if you're a legal nerd like me.

If you're looking for an answer as to why this happened, you won't find it here. Roach doesn't speculate on what caused the mass hysteria and accusations, just presents the facts as we know them today.

If you take an interest in this time period or are interested in a deeper dive into the people who lived through this time, I would recommend checking this out, but be prepared to spend a while with this meaty historical book.