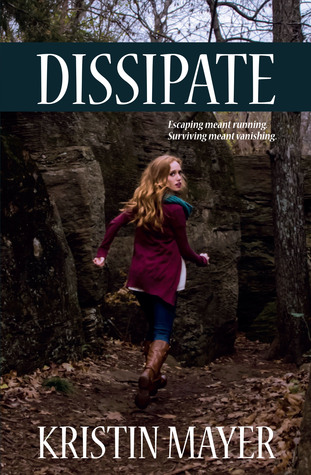 Dissipate
By Kristin Mayer
Published on May 21, 2015

Will Kenzie be able to fool The Society into thinking she's dead? Or will they put the pieces together and discover she's learned the truth about where she came from?

Kenzie Brooks was a fantastic MC. Just had to get that out there first. She was hesitant and quiet in the beginning, but she proved to be a brave, smart heroine that I easily loved. She absolutely made this book for me. She loses her mother, and finds out her entire world is a lie in one fell swoop. Instead of sitting around and moping, which she rightly could have, she decided to do something about it instead. Dissipate is about Kenzie setting out and making a life for herself, in a world that is completely new to her.

I really enjoyed this story. The story was good from the start, with a great plot, and full of heart. I flew through this one in on sitting, because I enjoyed being in this world. There is a love story, one that I fell in love with from the get-go. Aiden was a fabulous character, and he couldn't have been more perfect for Kenzie. He was sweet with her, and patient. They are a great couple, and I enjoyed seeing the romance bloom.

With some twist and turns, and the ability to stir my emotions in a big way, Dissipate was a story that I wholeheartedly recommend. It is different from my normal, darker reads, but it was the perfect story to put a smile on my face!

Kristin Mayer is a wife, a proud mother, and a full-time Analyst and Import Manager. Since an early age, she has always enjoyed reading and writing. While visiting her father one weekend, he suggested that she should take up writing again. With family and a career, she didn’t give it a lot of thought, until a story entered her mind and wouldn’t leave. It just kept forming and developing over a couple of months.

At the beginning of 2013, she decided to sit down and write it all down, but she kept it to herself. One sentence developed into two, and before she knew it, she had the makings of a novel.


Kristin tries to live life to the fullest during every moment. She loves to travel and meet new people. She holds a degree in International Business and uses it daily in her job. Kristin now adds “author” on her list of jobs, and feels very blessed and thankful.