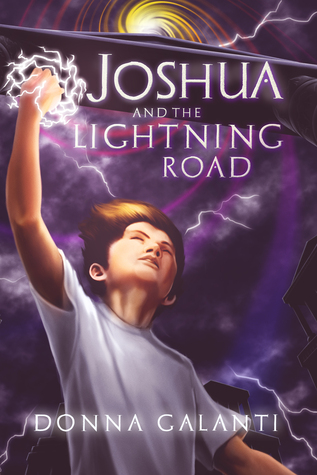 Joshua and the Lightning Road
By Donna Galanti
Published on May 19, 2015
Published by Month9Books, LLC.

Stay away from the windows, don't go outside when it's storming and whatever you do, do not touch the orb.

Twelve year old Joshua Cooper's grandpa has always warned him about the dangers of lightning. But Joshua never put much stock in his grandpa's rumblings as anything more than the ravings of an old man with a vast imagination. Then one night, when Joshua and his best friend are home alone during a frightful storm, Joshua learns his grandpa was right. A bolt of lightning strikes his house and whisks away his best friend - possibly forever.

To get him back, Joshua must travel the Lightning Road to a dark place that steals children for energy. But getting back home and saving his friend won't be easy, as Joshua must face the terrifying Child Collector and fend off ferocious and unnatural beasts intent on destroying him.

In this world, Joshua possesses powers he never knew he had, and soon, Joshua's mission becomes more than a search for his friend. He means to send all the children home - and doing so becomes the battle of his life.

I love middle grade stories like this one! A fun, fast-paced adventure story with themes that run the gamut from friendship to bravery, Joshua and the Lightning Road was a story I plan to share with my younger cousins and nieces and nephews, especially the boys!

Who knew the true danger of lightning? Joshua sure didn't, regardless of all of the warnings his grandpa, Bo Chez, has given him. When his best friend, and then himself, are grabbed by a pair of hands and taken, Joshua wishes he would have listened. Too late now, and it is up to Joshua to discover where they are, save his best friend Finn, the rest of the taken children, and hopefully himself. While on this terrifying adventure, Joseph learns things about himself that he never could have guessed. Will he succeed on this unexpected mission?

Joshua and the Lightning Road is such a good story. So fun, and fast-paced. Donna Galanti has a super seriously cool imagination, and she dragged me fully into this story, and I couldn't look away. Full of magic and mystery, with incredibly well developed characters (Here's looking at you, Joshua), I would not hesitate at all to recommend this story. I am 32, and I loved every second of it, and I would hand this off to my 12 year old cousin, and he would have a blast!

Thanks to Chapter by Chapter for letting me be a part of such an awesome tour!

Donna is the author of the Joshua and The Lightning Road series and the Element Trilogy. She is a contributing editor to International Thriller Writers the Big Thrill magazine and blogs at www.project-middle-grade-mayhem.blogs..., a cooperative of published middle grade authors. Visit her at www.donnagalanti.com and www.ElementTrilogy.com. Donna wanted to be a writer ever since she wrote a murder mystery screenplay at seven and acted it out with the neighborhood kids. She attended an English school housed in a magical castle, where her wild imagination was held back only by her itchy uniform (bowler hat and tie included!). There she fell in love with the worlds of C.S. Lewis and Roald Dahl, and wrote her first fantasy about Dodo birds, wizards, and a flying ship (and has been writing fantasy ever since). She’s lived in other exotic locations, including her family-owned campground in New Hampshire and in Hawaii where she served as a U.S. Navy photographer. She now lives with her family and two crazy cats in an old farmhouse and dreams of returning one day to a castle.