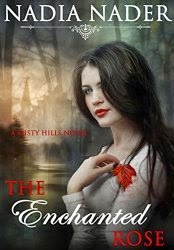 When Vivian’s mother dies in a tragic accident, Vivian’s world is turned upside down. Her life, as she knows it, is over. A new life, full of her mother’s secrets, begins…
Sent away by her father to live with two eccentric aunts on the mysterious Tremaine Estate, Vivian comes to learn that a powerful curse lurks over her family – one that only she may have the power to break. With each day she spends in Misty Hills, Vivian uncovers more unsettling discoveries about the town, her reclusive family, and herself.
Can Vivian let go of every truth she’s ever believed and discover who she really is, before the dark secrets hidden within the supernatural town threaten to consume her and those she loves?

The Enchanted Rose was a fun, fast-paced story about a girl named Vivian whose world is turned upside down after her mothers death. Her father decides he can't handle her alone and sends her to live with her moms sisters, whom she never knew existed. That isn't the only secret that will be revealed, and the more she learns about her mom, the more she wonders if she ever really knew her.

The Enchanted Rose is about magic, a curse, and the secrets that people keep. Vivian was an alright MC. She was a little too wishy-washy for me, going back and forth on things, and some of her reactions made no sense to me,  but overall she was smart and fun, and determined. She continued searching for answers, no matter the roadblocks she faced. Her aunts were polar opposites of each other, one loving and gentle, the other cold and distant. Vivian meets a few new friends, Skylar and Declan. They were good friends, but we didn't learn too much about them. They both seem like they may have interesting histories, and I am hoping for more in the next book. It looks like there is the possibility of a love triangle blooming for the next book, but as far as romance in this one, there isn't one. Vivian has a crush on the intriguing Hunter, and blushes a little about the rescuer Jackson. We will see where it goes in book 2.

There were some editing issues throughout the book, but nothing that deterred from the story. I feel like there could have been some more development of the characters, and the history of the town, Misty Falls. Finally, the ending was incredibly abrupt, and took me totally off guard. We were right in the middle of a scene, and then it was over.

All in all, The Enchanted Rose was a cute story. I think it would be a great mystery/paranormal story for the younger YA crowd. With magic and curses, a mysterious town, and mentions of shapeshifters and vamps, this first book leads into what could turn into a really good series.

Thanks to Xpresso Book Tours for allowing me the chance to read this book for the tour! 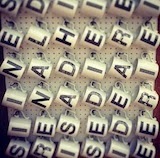 Nadia Nader was born and raised in Kuwait.
You can find Nadia on her website: www.NadiaNader.com
In addition to writing, Nadia’s interests include traveling around the world.