Me on the Floor, Bleeding 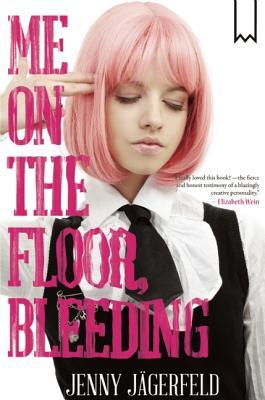 Me on the Floor, Bleeding
By Jenny Jägerfeld
Published on July 2014
Published by Stockholm Text
Source: Purchased

High school outsider Maja would never hurt her¬self on purpose as her dad, teachers, and classmates seem to believe. Can't a person saw off the tip of her thumb without everyone starting to worry? That is, everyone except Maja's mum, who seems to have disappeared from the face of earth.

Crashing a neighbor's party, Maja meets twenty-year-old Justin Case, a super-verbal car mechanic with pink pants, who makes her forget everything about absent mothers and sawn-off thumbs, at least temporarily. But then Maja hacks into her father's e-mail account and reads an e-mail that hurts more than all the electric saws in the world.

In this funny and clever coming-of-age novel, seventeen-year-old Maja describes each moment with such bare-bones honesty that one can't help but be drawn into her world. Wise beyond her years yet still surprisingly naïve, her story is entertaining and enlightening, at turns both hilarious and bittersweet.

This book, you guys. Okay, so full disclosure: In my every day life, I spend a good deal of time working with power tools. It's an awesome thing I love doing, and I would encourage you to learn how to do such things safely if you're into that sort of thing. Building stuff is fun, but like anything with sharp pointies (or even worse, dull pointies,) you've gotta be careful. End disclosure.

From a professional standpoint, I found myself really confused as to how this girl managed to accidentally trigger the lock on her saber saw and why her instructor wasn't actually keeping an eye on someone who clearly wasn't trained on this tool very obviously unsafely using it. That really, really colored my impression of the MC for the entire book. I couldn't let it go. I'm both sorry and not.

The rest of the book? It's a thing that happens. It's not great, but it's not awful. It's one of those pieces that stays steadily down the middle road. Part of it is that the MC is so detatched from her own experiences that it's hard to get lost in what's happening. If the MC keeps professing that they don't care, then why should the reader?

The plot itself is decently done, though I think that there were some definite nuances that were lost in translation here, a kind of cultural barrier that wouldn't have been in place if one were reading it in its original Swedish. That said, it does raise some issues that both deal with certain stigmas and the difficulties inherent in having a family that's split between two homes in two different cities. I would recommend this book on the conditions that the reader remembers that they're reading a translation and so it's not going to be perfect and that they ignore the word 'hilarious' in the summary. This is a cynical, almost desperate (and yes bittersweet) look at someone's life that at no point had me even thinking about laughing. If you're in the right frame of mind to be reading something like that instead of expecting something else, then yes it's a good book. If you're not, it's going to be a slog that has you wishing at points that you hadn't already committed yourself to finishing.