How to Roll Like Chris P. Bacon: A review by Crystalee 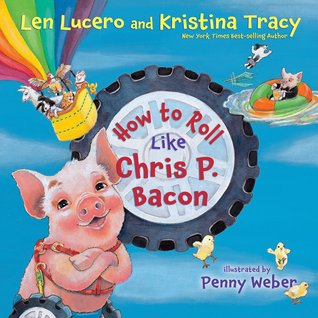 How to Roll Like Chris P. Bacon
By Len Lucero

This is the second book in a three book series of children's books featuring Chris P. Bacon-the little pig that's been inspiring oodles of people. This story will pick up for the first one left off.

Here's a quick bio of dear friend: Chris P. Bacon is one lucky pig. Born with malformed hind legs, he was taken to a vet with the request that he be euthanized. The veterinarian, Len Lucero, took one look at the little guy who appeared happy and healthy and vowed to keep him. Chris went home with Dr. Len and within a matter of weeks became an internet sensation and media darling. He's been on numerous television shows including Anderson Live, ABC Action News, and the Today show. He's also been featured on the Discovery Channel (Canada). But even more important, he's won thousands of hearts-he has nearly 80,000 fans on Facebook, a dedicated fan club, many popular videos on YouTube, and even a specially designed T-shirt, which can be ordered on his website (www.chrispbacon.org). Chris P. Bacon's joyful demeanor and excitement for life have inspired people all over the world to view their lives in a new way.

Last February, I reviewed the first book about Chris P. Bacon, called Chris P. Bacon: My Life So Far. Now, Chris is back with a new, inspirational story. In this installment, Chris teaches kids some valuable life lessons in a fun, non-preachy way. Among his lessons: Be adventurous! Get Silly! Pitch in!

The book's rhyming text and colorful illustrations of Chris flying in a hot air balloon and buying ice cream from the ice cream truck will have kids laughing. The book also begins and ends with real photographs of Chris P. Bacon, who is now an internet and TV sensation!

Check out the real Chris P. Bacon on YouTube!