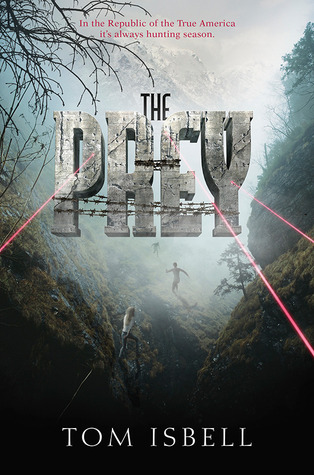 A hot debut trilogy and a riveting story of survival, courage, and romance in a future where creating a master civilization is the only thing prized, no matter the method. After the Omega (the end of the end), 16 year old guys known as LTs discover their overseers are raising them not to be soldiers (lieutenants) as promised, but to be sold as bait because of their Less Than status and hunted for sport. They escape and join forces with a girls’ camp, the Sisters, who have been imprisoned and experimented on for the "good of the Republic," by a government eager to use twins in their dark research. In their plight for freedom, these heroes must find the best in themselves to fight against the worst in their enemies.

Dystopian novels are popular around this time, from The Hunger Games to Divergent to The 5th Wave. It seems all that teenagers want to read is books like that. Well congratulations teenagers, because here is the next book for your reading list.


The Prey has a very unorthodox beginning which I immensely enjoyed. There was an undertone of mystery to it, but I could understand what the author was trying to push across at different moments. Some of the sentences did not strike me as very well thought out, but they didn’t really hinder the story so it was easy to ignore them. And may I just say that Tom Isbell established an amazing plot line. Yes, there are parts in it that could have been better, but the story itself I believe was fantastic.
The characters were amazing! I could really relate to some of them, and they were snarky and sassy which I loved. Book was totally like me, only a boy, with his books and falling for random people he sees once. And all the other Less Thans… like Cannon… Oh man I cried with them and felt for them and wanted to be there for them.  Sadly, I totally hated Hope, and she was one of the mains. She came to me as bossy, abusive, whiny, and totally out of control. Maybe you’ll like her though; that was my personal preference.
Okay teenagers, I’m going to break your hearts a bit here. If you’re looking for an amazing romance novel, go read some Nicholas Sparks. The romantic plotline was certainly not what kept me reading, and was actually a little forced. It was quite easy to tell that Isbell’s strength was writing adventure and not love stories. Honestly, he could have cut out all of that crap and I wouldn’t have missed it. This would be a fine guys’ book seeing as the romance mentioned was not enough to actually draw your attention, but for all you ladies just wishing for a love triangle… Sorry. This book isn’t for you.
With all that said, I think this was a good book. I had trouble putting it down, and sometimes I yelled at the characters when they were about to do something stupid. Add this book to your bookshelves, America, because someday this will be a hit!