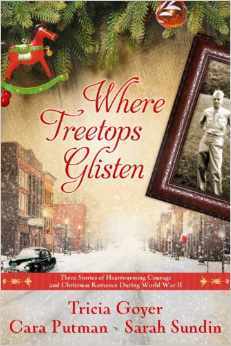 The crunch of newly fallen snow, the weight of wartime

Turn back the clock to a different time, listen to Bing Crosby sing of sleigh bells in the snow, as the realities of America’s involvement in the Second World War change the lives of the Turner family in Lafayette, Indiana.

In White Christmas by Cara Putman, Abigail Turner is holding down the Home Front as a college student and a part-time employee at a one-of-a-kind candy shop. Loss of a beau to the war has Abigail skittish about romantic entanglements—until a hard-working young man with a serious problem needs her help.

Abigail’s brother Pete is a fighter pilot hero returned from the European Theatre in Sarah Sundin’s I’ll Be Home for Christmas, trying to recapture the hope and peace his time at war has eroded. But when he encounters a precocious little girl in need of Pete’s friendship, can he convince her widowed mother that he’s no longer the bully she once knew?

In Tricia Goyer’s Have Yourself a Merry Little Christmas, Meredith Turner, “Merry” to those who know her best, is using her skills as a combat nurse on the frontline in the Netherlands. Halfway around the world from home, Merry never expects to face her deepest betrayal head on, but that’s precisely what God has in mind to redeem her broken heart.

The Turner family believes in God’s providence during such a tumultuous time. Can they absorb the miracle of Christ’s birth and God’s plan for a future?

Where Treetops Glisten is a collection of 3 related novellas.  The book as a whole centers around one family, with each story told by a different sibling.  It is a book that is full of the warm and fuzzies of Christmas.  This is absolutely a Hallmark movie in book form.

The "bad guys" aren't very bad and there is a ton of Christmas cheer in each of the three short stories.  Each story takes place in a different time during World War II, and yet with such a dramatic backdrop, the stories never take themselves too seriously.  The point of this book is to make you happy- and this book achieves like a warm mug of hot chocolate.

I have only read other books by one of the three authors, but their different writing styles blended together well.  I could tell that each part was written by a different person, but not in a distracting way.  This would make a lovely Christmas gift to anyone who likes light romance stories with a historical setting.