Nerd Blast ~ An Angel Torched My Homework & Other Lies by Miche Sipes ~ Giveaway, too!

THE REST OF THE STOPS CAN BE FOUND HERE, at Jean Booknerd! 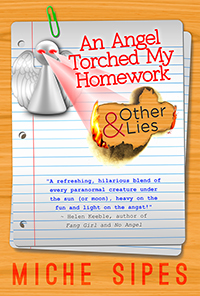 An Angel Torched my Homework & Other Lies
By Miche Sipes
Published on January 5, 2015

Carrie Philips just wants her junior year at Clement Academy to go smoothly. Sure, it’s the first high school in the nation to integrate Norms like her with the Differents. But the Diffs are just typical teenagers with “tiny” genetic anomalies. They’re not really vampires or werewolves or angels or zombies like you see in old movies. The Diffs just have special dietary needs and some unusual abilities. They’re certainly not dangerous or anything—at least that’s what Carrie has always believed, since her dad is a doctor of Different medicine.
But when several of her fellow students are mysteriously assaulted, cracks form in Carrie’s worldview. Cracks she tries to ignore while defending her friends from anti-Diff backlash and solving the mystery of who’s really behind the attacks. Meanwhile, she’s distracted by two criminally cute guys who both seem to like her (and hate each other). Then Carrie uncovers a bombshell that could forever change how Norms and Diffs see each other. So much for a quiet school year.
"What happens when you combine vampires, angels, werewolves and zombies with normal humans? Supernatural insanity! Miche Sipes has created a clever world, filled with lovable characters, unexpected plot twists and lots of humor. I loved this book. 5 stars!" --Lynda Hilburn, author of the Kismet Knight, Vampire Psychologist series
"A refreshing, hilarious blend of every paranormal creature under the sun (or moon), heavy on the fun and light on the angst!" -- Helen Keeble, author of Fang Girl and No Angel

Miche Sipes wrote her first play at the age of six and has been writing creatively ever since. Well, if you don’t count the occasional decade-long lapse. Miche has lived in Maryland and Florida, but now calls Colorado home. Whenever she’s not writing—or finding ingenious ways to procrastinate like ironing shoelaces or flossing her cat’s teeth—she can be found hiking in the mountains. Then again, there’s a good chance you won’t find her because she’s probably lost.