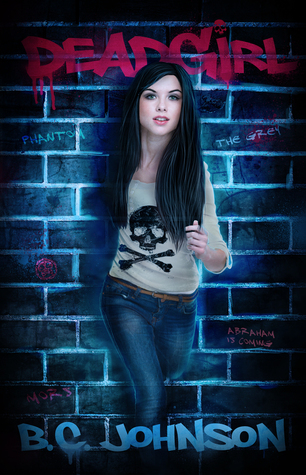 Lucy Day, 15 years old, is murdered on her very first date. Not one to take that kind of thing lying down, she awakens a day later with a seemingly human body and more than a little confusion. Lucy tries to return to her normal life, but the afterlife keeps getting in the way.

Zack, her crush-maybe-boyfriend, isn't exactly excited that she ditched him on their first date. Oh, and Abraham, Lucy’s personal Grim Reaper, begins hunting her, dead-set on righting the error that dropped her back into the spongy flesh of a living girl. Lucy must put her mangled life back together, escape re-death, and learn to control her burgeoning powers while staying one step ahead of Abraham.

But when she learns the devastating price of coming back from the dead, Lucy is forced to make the hardest decision of her re-life — can she really sacrifice her loved ones to stay out of the grave?

We had the most excellent opportunity to ask B.C. Johnson some questions!  Check out our interview:


Did you always know that you wanted to be a writer?  Do you have any advice for aspiring writers out there?

There were about two years where I couldn't decide if I wanted to be a fighter pilot, Luke Skywalker, or a writer, but I pretty much locked it down by 2nd grade. Some people are bolted together to do one thing, and writing is definitely mine.

Advice for aspiring writers? Know your limits, find their shape, get really good inside your niche, and then start kicking the doors down. What I mean is this – you may want to write multiple genres and styles. I sure do. However, I learned very early on (through multiple humbling experiences) that you should learn how to use a hammer before you buy the pneumatic mega-driver 9000 and try to build a spaceship with it.

At one point I got a wild hair up my butt to try to write a western novel, ignoring the fact that I'd never even read a western novel. I liked Tombstone a lot, and so I was like "Yeah let's do that!" Which is great enthusiasm-wise, but the book stalled halfway through when it became all too clear I had no idea what I was doing. A similar thing happened when, with my second book ever, I tried to write a novel with fourteen different viewpoint characters. Keep in mind, I hadn't written a novel with two viewpoint characters at that point. Double dumbass on me, basically.

I'm not saying "don't do what you want," that's crap. The best part about writing is making up whatever, whenever, however. All I'm saying is know what you aren't good at yet to spare yourself the heartbreak. Then get really good and you can write whatever you want.

What is your favorite line or scene from your book?

Hmm. Hard to say without spoilers. My favorite scene is near the end of the book. It actually is the end of the book, come to think of it. When I first came up with the idea for Deadgirl I figured out the ending first then kind of worked backwards from there. Suffice to say, the end is . . . interesting. I've had people who loved it and people who really, really wanted me to change it. Okay, I'll stop teasing.

What inspires you? Are there specific authors, shows, movies, or music that really inspires you/your writing?

It's a lame answer, but everything. I'm visually-focused, so movies, TV, and video games have always massively affected what I write. My novels tend to be very visual – lots of crazy landscapes, fast action, and character blocking.

Music is a big one, too. Before I start writing I usually create a playlist of all the moods I want to feel and the themes I want to explore for that particular book. I'm actually working on creating a Spotify playlist for Deadgirl that mirrors what I have on my computer so I can share it for fans. Assuming I have fans. Which would make me squee like a tiny girl baby.

Can you share a little bit about any other upcoming projects/works in progress?

The Deadgirl sequel is all done on my end, and is in the pipes with my agent. The process hasn't started yet, so I have about three or four drafts with three or four editors to do still, but that part doesn't take too long.

At the end of November I have a short story in the 2nd Curiosity Quills short story anthology. I also have another finished book still waiting on word from the higher-ups to see what happens to it. It's weird and funky though, a "Mad Max" meets "X-Men," so who knows what's going to happen with that one.

Keeping with the theme of our blog name, The Best Books Ever, I've got to ask: what is your absolute favorite book?

Absolute favorite of all time? That's really, really hard. It's like picking your favorite child, but if you were a spider who had 500 children. Allow me two? Pretty please?! Favorite book as a child was probably "Dragons of Summer Flame." It's just excellent epic fantasy from start to finish, and it tells a pretty unorthodox story.

Born in Southern California, B.C. Johnson has been writing since he realized it was one of the few socially acceptable ways to tell people a bunch of stuff you just made up off the top of your head. He attended Savanna High School in Anaheim, and an undisclosed amount of college before deciding that weird odd jobs were a far greater career path.

This lead him to such exciting professions as: aluminum recovery machinist, lighting designer, construction demo, sound mixer, receptionist, theater stage hand, wedding security, high school custodian, museum events manager, webmaster, IT guy, copywriter, and one memorable night as the bouncer at a nightclub. He is trying very hard to add “vampire hunter” and “spaceship captain” to that list.

He currently lives in Garden Grove with his supernal wife Gina, his half-corgi, half-muppet dog Luna, and his new half-grayhound, half-living-tornado-of-destruction Kaylee. He also spends time with his two brothers, his parents, and his close friends, whose primary pursuit are usually healthy debates about movie minutiea. When he’s not working or writing, he’s been to known to pursue all conceivable geeky avenues of interest including but not limited to video games, the sort of TV shows/movies Benedict Cumberbatch might star in, graphic novels, podcasts, funny gifs, the whole thing.

He’s also been known to apply his special brand of hyperbole and mania to pop-culture humor essays for various websites that can be found on his homepage, bc-johnson.com. B.C. also has a high school noir short story called “The Lancer” available on Kindle.

Deadgirl is his first novel.