BLOG TOUR: The Tree of Water 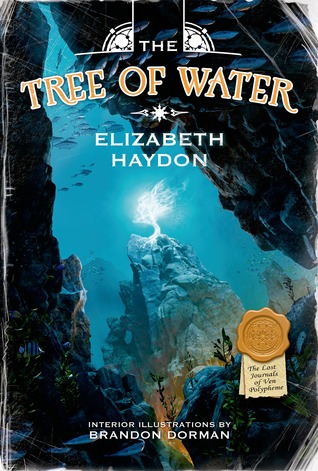 The epic voyages continue in The Tree of Water, the fourth adventure in bestselling author Elizabeth Haydon’s acclaimed fantasy series for young readers, The Lost Journals of Ven Polypheme.

As Royal Reporter of the land of Serendair, it is the duty of young Charles Magnus "Ven" Polypheme to travel the world and seek out magic hiding in plain sight. But Ven needs to escape the clutches of the nefarious Thief Queen, ruler of the Gated City, whose minions are hunting for him. His friend, the merrow Amariel, has the perfect solution to his dilemma: Ven and Char will join her to explore the world beneath the sea.

As they journey through the sea, Ven finds himself surrounded by wonders greater than he could have ever imagined. But the beauty of the ocean is more than matched by the dangers lurking within its depths, and Ven and his friends soon realize that in order to save thousands of innocent lives, they may have to sacrifice their own. For everything in the ocean needs to eat…


Excerpt from THE TREE OF WATER

The human boys had an expression back in the faraway city of Vaarn where I was born. It went like this:
Curiosity killed the cat
Satisfaction brought him back
I am a curious person. I was just as curious back in my early days in Vaarn as I am now, perhaps even more so, because my curiosity had not yet been given a chance to be satisfied.
The first time I heard this expression, I was very excited. I thought it meant that my curiosity could make me feel like I was dying, but it would let up if I discovered the answer to whatever was making me curious.
I told my mother about the rhyme. She was not impressed. In fact, she looked at me as if I had just set my own hair on fire on purpose. She patted my chin, which was woefully free of any sign of the beard that should have been growing there.
“That’s very nice,” she said, returning to her chores. “But just in case nobody told you, you are not a cat, Ven. Unlike you, cats have whiskers.”
My pride stung for days afterward.
But it didn’t stop my curiosity from growing as fast as my beard should have been.
My name is Charles Magnus Ven Polypheme, Ven for short. Unlike the human boys in Vaarn, I am of the race of the Nain. Nain are somewhat shorter than humans, and grumpier. They live almost four times as long as humans, and tend to be much less curious, and much less adventurous. They hate to travel, don’t swim, and generally do not like other people. Especially those who are not Nain.
I clearly am not a good example of my race.
First, I am very tall for a Nain, sixty-eight Knuckles high when I was last measured on the morning of my fiftieth birthday. I’ve already mentioned my uncontrollable curiosity, which brings along with it a desire for adventure. I have been blessed, or cursed, with quite a lot of that recently.
But as for the curiosity, while I’ve had a lot of satisfaction for the questions it has asked me, it doesn’t seem to matter. As soon as one burning question is answered, another one springs to mind immediately. As a result, I am frequently in trouble.
So now I am about to lay my head on a chopping block, on purpose, and a man with a very sharp knife is standing over me, ready to make slashes in my neck.
I’m wondering if in fact instead of being a live Nain, I am about to end up as a dead, formerly curious cat.


Because now I have three whiskers of my own.


Are you intrigued? I sure am! Enter the below giveaway for a chance to win a copy for yourself! (US and Canada addresses only.)


Little is known for sure about reclusive documentarian and archanologist Elizabeth Haydon.

She is an expert in dead languages and holds advanced degrees in Nain Studies from Arcana College and Lirin History from the University of Rigamarole. Her fluency in those languages [Nain and Lirin] has led some to speculate that she may be descended of one of those races herself. It should be noted that no one knows this for sure. Being an archanologist, she is also an expert in ancient magic because, well, that’s what an archanologist is.

Being a documentarian means she works with old maps, books and manuscripts, and so it is believed that her house is very dusty and smells like ink, but there is no actual proof of this suspicion. On the rare occasions of sightings of Ms. Haydon, it has been reported that she herself has smelled like lemonade, soap, vinegar, freshly-washed babies and pine cones.

She is currently translating and compiling the fifth of the recently-discovered Lost Journals when she is not napping, or attempting to break the world’s record for the longest braid of dental floss.