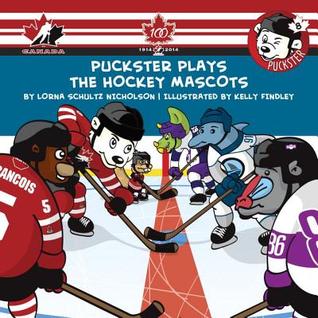 In Puckster Plays the Hockey Mascots, Puckster and his pals realize the dream of being on the ice with their hockey heroes - the Toronto Maple Leafs mascot Carlton the bear and the Montreal Canadiens mascot Youppi. These legendary NHL mascots inspired Puckster to play hockey and cheer for Hockey Canada and now here he was playing in a real game with these hockey greats. But when his drive to win and desire to impress others gets in the way, Puckster realizes that he has let his team down and forgotten the true spirit of teamwork.

Puckster Plays the Mascots is yet another exciting hockey adventure for young fans. With the exciting addition of two legendary characters and the important message of teamwork, this classic tale offers all fans of the game a lesson in friendship.

I don't know how much business I have reviewing childrens' books, not having any children in my life to read said books to, but the hockey offseason makes one do strange things, up to and including requesting picture books about the sport from Netgalley.

Regardless of my knowledge of actual, real children, however, I thought this book was super cute and had a great message.  Puckster, a hockey-playing polar bear (?) is playing a game against famous hockey mascots, and his desire to impress everyone leads to some pretty crappy teamwork on his part, which he doesn't understand until it's almost too late.

As an aside, even though the characters are all animals and dinosaurs and, well, whatever Youppi is, there's great representation on the teams - there's at least one girl playing (I can tell because she's pink and has eyelashes), and there's even one player who is disabled and plays on a sled.

This story will most resonate with kids who play or are fans of hockey (particularly given the guest apparences by actual NHL mascots), but would be good for any kid involved in team sports.  The value of playing well with others is one that can always stand to be reinforced, and this book does it in an easy to understand way - you understand Puckster's excitement and desire to score a bunch of goals himself, but as a team player, you need to also understand things like sharing and doing what's best for the team.