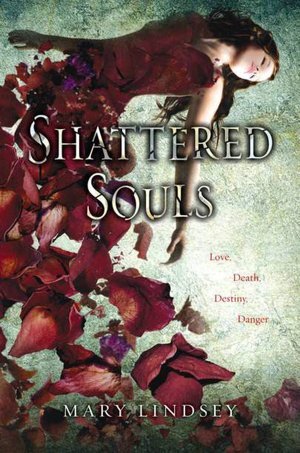 A thrilling debut story of death, love, destiny, and danger
Lenzi hears voices and has visions - gravestones, floods, a boy with steel gray eyes. Her boyfriend, Zak, can't help, and everything keeps getting louder and more intense. Then Lenzi meets Alden, the boy from her dreams, who reveals that she's a reincarnated Speaker - someone who can talk to and help lost souls - and that he has been her Protector for centuries.
Now Lenzi must choose between her life with Zak and the life she is destined to lead with Alden. But time is running out: a malevolent spirit is out to destroy Lenzi, and he will kill her if she doesn't make a decision soon.

I wish that I could give this book more than a 2 star rating, but I just can't. It wouldn't feel right to look past issues that seriously bothered me in this book. It would be wrong as a reviewer, and wrong just for myself, to not give this a true rating. But man, I really do dislike giving negative reviews. Especially when the book could have been a great read.

Second time around, and I didn't quite like it as much as I seemed to last time, which still wasn't a whole lot. Certain things really, really pissed me off about the relationships between Lenzi and Zak and Lenzi and Alden. I won't go into detail here so as not to spoil, but I WILL say for anyone wanting to read this, go check out some of the low rating reviews on Goodreads and read them.... I absolutely can say that I would in no way recommend this to a young female OR male that is still incredibly impressionable. These are not the types of relationships that need to be emulated by anyone at all, much less teens. I know I am saying mostly bad things, and I stand by them, but I will say that this is a very readable story. It is well written, and the premise is a really cool one, with the Speakers and Protectors and their respective jobs. I just wish that certain elements had been left out, and that others had been used as teaching elements about what is NOT okay in a relationship. Abuse is NOT okay, and when someone does abuse you they are not a cool person. They may have had a rough life, and yes that is terrible and no one should have to deal with it, but they also have the choice to rise above and be a better person. And men and women have the right to walk away from an abusive relationship, and not have to feel like they have to give excuses. Last thing, CHEATING is not okay. NEVER is it okay. IF you are truly happy in a relationship, and truly love someone, there won't ever be a question of wanting to kiss someone else. And if there is, maybe that means you aren't in the right relationship and you should walk away before you both get hurt.

I reread Shattered Souls to re-familiarize myself with the story and the world in anticipation of reading the companion novel, Fragile Spirits. Despite my issues with the first book, I am still going to give Fragile Spirits a shot. Everybody deserves a second shot, especially all of the amazing YA authors out there!