Crystalee ponders Words and Their Meanings 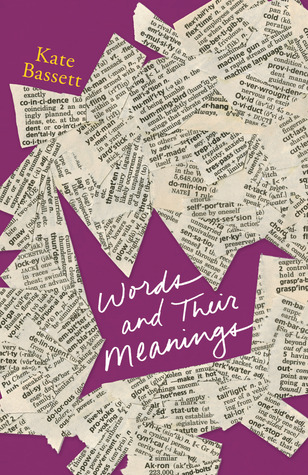 Words and Their Meanings
By Kate Bassett
Published on September 8, 2014
Published by Flux
Source: NetGalley

Anna O’Mally doesn’t believe in the five stages of grief. Her way of dealing with death equates to daily bouts of coffin yoga and fake-tattooing Patti Smith quotes onto her arms. Once a talented writer, Anna no longer believes words matter, until shocking discoveries– in the form of origami cranes– force her to redefine family and love.

As Anna goes in search of the truth, she discovers that while every story, every human being, has a last line, it might still be possible to find the words for a new beginning.

Wow. I cannot believe that this is Kate Bassett's first novel. It is so full of complexity that I love in young adult novels. As a writer, this is the kind of novel I strive to write.

Anna O'Mally has lost the person she loved most-- her young uncle, Joe, and blames herself. Her way of dealing with her grief is to transform herself into a replica of Patti Smith, a singer, songwriter, and poet from the 1970's. She dyes her hair and even writes Patti Smith quotes on her arms with black Sharpie. She stops writing and falls into a deep depression. Bassett never uses the word "depressed" to describe Anna, but her actions clearly show that she is. Then, Anna discovers some family secrets that she doesn't know how to deal with, and she's thrown into a whirlwind of emotional chaos that she might not survive.

Words and Their Meanings takes on some difficult issues like suicide, and that's exactly why I love it. Anna has such a strong voice that I found myself getting wrapped up in what it is like to live like her, to have given up on the only thing that makes you happy, to have lost so much in her life before her eighteenth birthday, and to no longer feel whole. I suppose I should put a "trigger warning" disclaimer on this novel because I truly believe it will envelop any reader with sadness and anger. The writing is beautiful and rich and not at all "fluffy" like many contemporary YA novels.

If I have one criticism of this novel it is that so much happened all at once! Anna's family secrets come at her like wildfire, and they come at the reader as well. But that's what also made the second half of the novel so addictive. I wanted to keep reading and find out if Anna was going to be okay. I was cheering for her when she got a maybe-boyfriend, and crying with her when it looked like she might experience another death in the family. I loved Anna and so will you.