Blog Tour ~ Finding Her Way Back ~ Review (by Jaime) and Giveaway 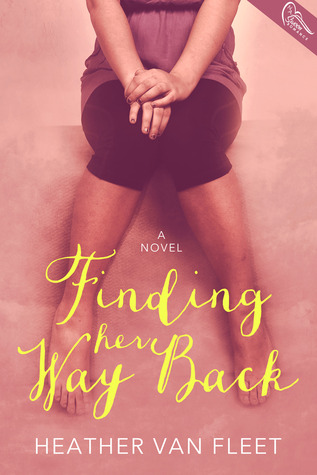 Finding Her Way Back
By Heather Van Fleet
Published on October 7, 2014
Published by Swoon Romance
3 1/2 Stars!

Meet Callie. She’s nineteen, quirky, and fears commitments. She also has a love/hate relationship with her tennis shoes.

Nine months of college, done and gone, and all Callie has to show for it is her freshman thirty. But alas, no worries, life has other crap plans for her now. Plans that include a set of nuptials from hell for her older, she–devil sister Anna. Struggling to rid her chubby–sexy vibe, Callie is put on a strict Anna regimen of ‘do this do that’ while attempting to avoid the unavoidable. The unavoidable being Ky Hampton: her once skinny–skater–boy turned sex–god, ex best friend from across the street.

Kylan feels as though he is a waste. A mechanic, country music singer with not a lyrics to his name. A boy with a proverbial skateboard still strung around his neck from high school. He’s lost, and he’d be the first to admit it. But the moment he spots Calla Lily––with a cemented penis in hand––the more he realizes that she’s exactly the muse he’s been missing.

But when the going gets tough, and the secrets of her past grow thicker, Callie has to figure out if her tennis shoes will be her escape this time around in life, or her demise instead.


Yay for me! Stepping outside of my comfort zone yet again! And this time, it is the dreaded romance novel. But I learned something with Finding Her Way Back. Romance isn't always dreaded. Sometimes, it can draw you in and hold you tight just as much as any other genre. The author just has to be that good, and you just have to give it a chance. The author, Heather Van Fleet, was just that good!
Cheers for the chubby girls out there. I have been there, and I have felt the ire of someone like Callie's awful, horrible "perfect" sister. But the difference, I never embraced it and the fact that Callie embraces herself, Miss Lane Bryant model (!), made me immediately like our MC. Her sister, on the other hand, I really wanted to whoop her arse! That changed (slightly) over the course of the book. We learn some secrets that were always hinted at, but other things were going on that kind of distracted me.
And that other thing was Ky. Ah, Ky. Good gravy, how I enjoyed Ky! Best friend skater boy who is like a brother turned "what the heck happened to you" hot boy! Ky was her rock through every thing until she left for college. He calls her Calla Lily! But she runs from him, because she is scared.
I really enjoyed this book, a lot. Callie did tend to get on my nerves on occasion, and the pacing was, for me, a bit slow at times. I did enjoy watching Callie grow throughout the novel, and by the end she no longer got on my nerves in the least. I was proud of her.
Romance may not be something that I will read all of the time, but thanks to FInding Her Way Back it will definitely not be off the table. And if there ever comes a time when we get more Callie and Ky, I am all in! Thanks so much to YA Bound Book Tours and Heather Van Fleet for choosing me to be part of the tour! I enjoyed it every step of the way!

Midwestern native Heather Van Fleet lives in a small town on the Iowa/Illinois border. She’s a wife to her hubby--and high school sweet heart--Chris, as well as a mom to her three little girls, Kelsey, Emma and Bella. When she’s not obsessing over her fictional book characters, cooking dinner, or running around chasing her crazy kiddos, you can usually find her with her head stuck in her Kindle, sucking down White Chocolate Mochas like they're water.