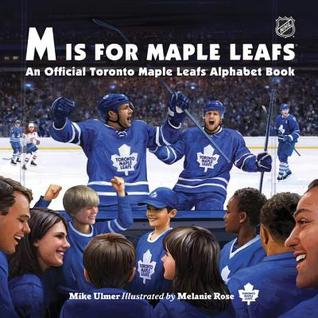 For nearly a century, the Toronto Maple Leafs have stood as one of the most popular hockey franchises in the NHL. With M Is for Maple Leafs, children across North America will discover the alphabet while being introduced to interesting Leaf history. From people (such as Mats Sundin and Johnny Bower) to hockey terminology (line change and face-off) and places and things (dressing room, Air Canada Centre, puck), the world of hockey is depicted in this fun and lively picture book. Featuring rhyming text from author Mike Ulmer and striking illustrations from Melanie Rose, this book captures the spirit of "Canada's game." M Is for Maple Leafs is destined to become a classic that will be handed down from generation to generation.

So apparently I have two weaknesses when it comes to children's picture books: books about animals, and books about hockey?  Listen, the off-season is long and I can only sit around wailing IS IT OCTOBER YET so many times before my friends all get sick of me, so I get to entertain myself with kids' books about the Leafs.

Anyway, this book takes you through the alphabet using all sorts of hockey- and Leafs-centric facts and stats.  Learn about things like faceoffs, ice, line changes, etc., as well as Leafs greats like goalie Johnnie Bower, Wendel Clark, and others. The text is clear and easy to understand - each page gets a brief rhyming verse, plus another paragraph of additional facts about the verse's topic.  There's an additional two-page spread at the end of the book with even more alphabet trivia.


Artist Melanie Rose's art is absolutely beautiful, something I'd love to see in person and not just on a computer screen.  Her paintings are very, very good, and her likenesses of players are realistic and spot-on.  If your kid is a big hockey fan, you can very easily play the "name that player" game, instead of going "well... that's a guy... in a Leafs jersey".

(I am, however, a little concerned about the factual accuracy of the two-page spread that shows Jonathan Toews apparently losing a face-off to Tyler Bozak, and Sidney Crosby failing to score on James Reimer, but, well.  Leafs.  Kids' book.  I get it.)

Sorry, this is less about this adorable book, and more about me. Whatever - the point is, if you're a Leafs fan, a) I'm sorry about your team, dude, Leafs gotta Leaf, and b) you probably need to have this book for the little ones in your life.  If you're a hockey fan in general, you might also want to pick this up because it's just a cute, loving look at the sport, regardless of your team allegiance.