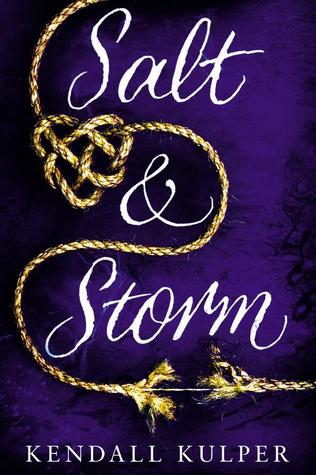 A sweeping historical romance about a witch who foresees her own murder--and the one boy who can help change her future.
Sixteen-year-old Avery Roe wants only to take her rightful place as the witch of Prince Island, making the charms that keep the island's whalers safe at sea, but her mother has forced her into a magic-free world of proper manners and respectability. When Avery dreams she's to be murdered, she knows time is running out to unlock her magic and save herself.
Avery finds an unexpected ally in a tattooed harpoon boy named Tane--a sailor with magic of his own, who moves Avery in ways she never expected. Becoming a witch might stop her murder and save her island from ruin, but Avery discovers her magic requires a sacrifice she never prepared for.


Well, this book is definitely not a happy-go-lucky, skipping through the park and singing a tune kind of read. Salt & Storm is dark and bleak. It hits hard in some places, especially for an emotional reader like me. And...... I really enjoyed it!
It is a different take on witches. Definitely not something that I have read before. There are moments of happiness, and a sweet romance. But there is also heartbreak. I won't give any details for the story at all, except to say that Avery is a Roe witch, and she needs to awaken her magic. The journey to do so is this story, and this story is full of the tension and pressure and fear that Avery feels.
Tane was a good character, and I enjoyed the romance. But with this story, my focus was the magic. Witches are some of my favorites to read about and when I get my hands on a good witchy story, every other aspect takes a back seat. Tommy is also a character to watch for, and just be prepared for the... character that is Avery's mom.
All in all, this a great story. I really enjoyed it from beginning to end. I would absolutely recommend you giving it a try, but be warned! The ending of this is rough! In a good way. I love that Kendall Kulper isn't afraid to go places and do things that a lot of authors steer away from. It makes this book stand out.

Kendall Kulper writes historical fiction with a fantasy twist for teen readers and knows more about nineteenth century whaling than she ever imagined. Her debut YA novel, SALT & STORM will be published by Little, Brown September 23, 2014. She graduated from Harvard University with a degree in history and literature in 2008 and spent several years as a journalist before deciding to write full-time. She grew up in the wilds of New Jersey and now lives in Boston with her husband and chronically-anxious Australian Shepherd mix, Abby.