Amanda thinks Positive is a powerful book you should read! 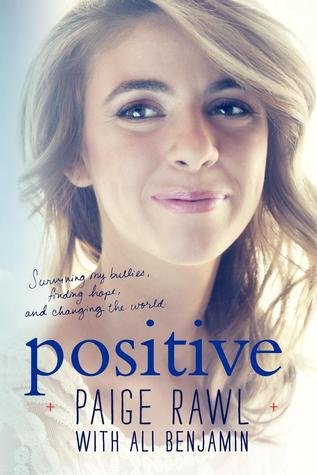 In this compelling and compulsively readable memoir, nineteen-year-old Paige Rawl tells the story of how she was mercilessly bullied in middle school...and how she overcame the ordeal to change her world for the better.

In this astonishing memoir, Paige tells a story that is both deeply personal and completely universal—one that will resonate deeply with the thousands of children and adults whose lives have been touched by bullying.

Paige Rawl has been HIV positive since birth…but growing up, she never felt like her illness defined her. It never prevented her from entering beauty pageants or playing soccer or making the honor role.

On an unremarkable day in middle school, while attempting to console a friend, Paige disclosed her HIV-positive status—and within hours the bullying began. She was called "PAIDS," first in whispers, then out in the open. Her soccer coach joked that she was an asset because opposing team members would be too afraid to touch her. Her guidance counselor told her to stop all the “drama,” and her principal said she couldn’t protect her. One night, desperate for escape, Paige swallowed fifteen sleeping pills—one for each year of her life to date. That could have been the end of her story. Instead, it was only the beginning.

The gripping first-person account of Paige’s life will pull in even the most reluctant readers of nonfiction, and her call to action to choose compassion over cruelty will stay with them long after they turn the last page.


Wow was this book powerful.  I found it almost painful to read at times and wanted to cry for Paige. It is hard to think about the fact that his happened in the 2000s and that this was a REAL story, not a made up one.

Paige Rawl is someone I want my children to have as a heroine.  She is strong, smart, and has a heart for other people.  For someone so young, she has been forced to be wise beyond her years.  It was so hard to read everything that happened to her.  As a teacher, I was horrified by the way Paige was treated- the names, the bullying, it was unbelievable.

The way Paige moved from a place of darkness to a place of healing is something that teens will relate to and be engaged with.  I would go so far as to make this book required reading for every high school class.  This a powerful book and Paige is someone who is a powerful voice for teens who are born with any sort of difference.