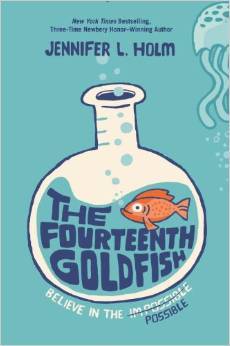 Galileo. Newton. Salk. Oppenheimer. Science can change the world . . . but can it go too far?

Eleven-year-old Ellie has never liked change. She misses fifth grade. She misses her old best friend. She even misses her dearly departed goldfish. Then one day a strange boy shows up. He’s bossy. He’s cranky. And weirdly enough . . . he looks a lot like Ellie’s grandfather, a scientist who’s always been slightly obsessed with immortality. Could this pimply boy really be Grandpa Melvin? Has he finally found the secret to eternal youth?

With a lighthearted touch and plenty of humor, Jennifer Holm celebrates the wonder of science and explores fascinating questions about life and death, family and friendship, immortality . . . and possibility

When Ellie's grandfather (a mad scientist-type) discovers the secret to staying young and turns himself into a teenage boy, her family suddenly finds itself with a unexpected house guest. Melvin looks like a teenage boy but dresses like Grandpa. He goes to school with Ellie, but grumbles about not being mentioned in the science textbooks. When he convinces Ellie and her new friend to help him steal his secret project from his lab, hilarity ensues. The Fourteenth Goldfish is yet another hilarious, action-packed middle grade novel that both boys and girls will enjoy.

Along with the fun, this book also does a great job at introducing science to girls. As Ellie bonds with her grandpa, she learns about scientists like Salk, Oppenheimer and Marie Curie. She learns to use a microscope and think scientifically. She thinks critically about scientific discoveries in the past and eventually comes to a conclusion about how her grandpa's secret project might affect the world.

I really appreciated how the book was essentially a metaphor for coming to terms with life and death, in a child-friendly way. Ellie has had thirteen pet goldfish die on her, her grandmother has died, her grandfather wishes to be immortal, and Ellie's relationship with her best friend is coming to an end. Little details that add to this theme also made this a book I could appreciate as an adult as well.

I didn't really like the end, but I also don't know how else it could have ended. What do you do with a grandpa stuck in a fourteen-year-old's body? Does he find a way to age himself again? Does he start over as a teenager and correct his past mistakes? At least Ellie seems to have grown, and does the ending hint at a new beginning for her as well?