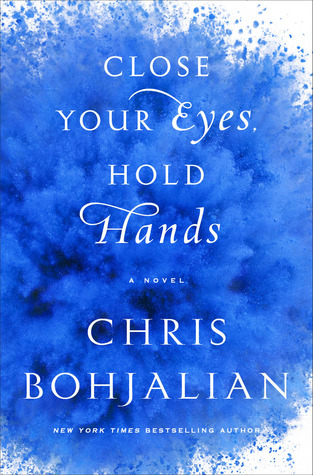 Close Your Eyes, Hold Hands is the story of Emily Shepard, a homeless girl living in an igloo made of garbage bags in Burlington. Nearly a year ago, a power plant in the Northeast Kingdom of Vermont had a meltdown, and both of Emily's parents were killed. Devastatingly, her father was in charge of the plant, and the meltdown may have been his fault—was he drunk when it happened? Thousands of people are forced to leave their homes in the Kingdom; rivers and forests are destroyed; and Emily feels certain that as the daughter of the most hated man in America, she is in danger. So instead of following the social workers and her classmates after the meltdown, Emily takes off on her own for Burlington, where she survives by stealing, sleeping on the floor of a drug dealer's house, inventing a new identity for herself, and befriending a young homeless kid named Cameron. But Emily can't outrun her past, can't escape her grief, can't hide forever-and so she comes up with the only plan that she can.

This book gave me a book hangover. You know, the feeling where even after you've finished reading, you can't make yourself go back to the real world? My head is still floating somewhere in Emily's world.

I needed a book unlike anything I've read lately, and this one sure fit that description! Emily is sixteen years old, but has much bigger things to worry about than dates and clothes. Her parents both abuse alcohol, and it seems it is her father's fault the power plant had a meltdown. Now, an orphan who feels unwelcome in her own town, she must find her way through life on her own.

What haunts me most about this book is that there is no indication of the year in which it takes place. All cultural references are modern, but I get the sense of a time period in the not-too-distant future. The nuclear meltdown is, of course, fictional, but it seems like something that really could happen. Emily lives on the streets and does whatever dangerous and disgusting thing she needs to do to survive for a long nine months. This, too, feels realistic and authentic to me; rarely is there a moment when I find myself suspending belief.

One of the things I love most is how Emily often quotes Emily Dickinson poems. She knows all about Dickinson's life and even at one point strives to live like her. She also takes on an alter ego named Abby Bliss, who was Dickinson's best friend in real life. These elements really make me relate to Emily and see her as an intelligent human being despite all of the (what may be seen as immoral) choices she makes on the street.

Close Your Eyes, Hold Hands may have a teenage protagonist, but it's written more like a novel for adults. Maybe that's why I found it so refreshing among the long list of formulaic young adult novels I've read lately. Be warned, it is pretty gritty and contains reference to sex, drugs, and cutting. I would recommend it for older teens, maybe 17 and above. This "17 and above" reader absolutely loved it!