I Was the Cat 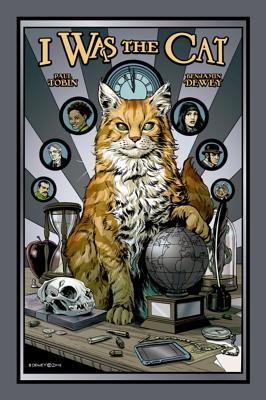 I Was The Cat
By Paul Tobin & Benjamin Dewey
Published on August 6th 2014
Published by Oni Press
Source: Netgalley

Allison Breaking is a talented journalist with her own blog and a lot of bills to pay. So when she receives an offer from a mysterious stranger named Burma to write his memoirs, it's an offer she can't refuse, not even with all the red flags popping up. But Burma is quite literally unlike any man Allison's ever known - because he's a cat! And this cat has stories to tell about how he (over the course of a few lifetimes) has shaped the world - and another, darker story that Allison must risk all to uncover... a story of what this particular cat has been doing with the LAST of his nine lives.

A story about a talking cat trying to take over the world? I'm in!

Actually, I was mostly drawn to this because of the art of Benjamin Dewey, who is responsible for the always awesomely weird Tragedy Series. But also: talking megalomaniacal cat.

The bulk of the story is given to Burma recounting his previous eight lives for Allison, who accepts the fact that she's working for a talking cat with much more coolness than I could ever muster. (TALKING. CAT.) As the story progresses, though, you start to get glimpses that Burma is a little more than just a cat talking about the past, as some subplots kick in showing what Burma's up to today.

I think this story somehow managed to have both too much and too little backstory.  There were times where I was definitely bored with the long sequences detailing Burma's past lives.  And yet, somehow, I wanted to know more. I was left with a lot of questions and felt like some important plot points had been glossed over in favor of more explanation for the current day events and characters (like, why does one of Burma's henchmen-type-dudes look straight out of a Sherlock Holmes movie? is he a secret hipster? is he immortal? tell me more!).  There was too much plot for the story they were trying to tell, and I think it would have been better served by either making sure this was at least a two-book run, or cutting down on some of the digressions. The ending does leave things kind of ambiguous, so there's potential for a second book that could clear up some of the gaps this one left.

Overall, despite some plot holes, this was an entertaining read, especially once the present-day plotline kicked in.  Check it out for Dewey's art, if nothing else, especially in the latter chapters.  I don't want to tell you what to look for because of spoilers, but there are some pretty epic spreads whenever the story switches entirely to the present day.
graphic novels