On the Road to Find Out 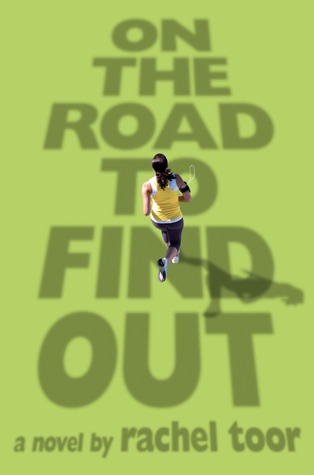 On the Road to Find Out
By Rachel Toor
Published on June 10th 2014
Published by Farrar, Straus and Giroux (BYR)
Source: Publisher

A funny, uplifting debut about running, romance—and dealing with college rejection and other hurdles

On New Year’s Day, Alice Davis goes for a run. Her first ever. It’s painful and embarrassing, but so was getting denied by the only college she cares about. Alice knows she has to stop sitting around and complaining to her best friend, Jenni, and her pet rat, Walter, about what a loser she is. But what doesn’t know is that by taking those first steps out the door, she is setting off down a road filled with new challenges—including vicious side stitches, chafing in unmentionable places, and race-paced first love—and strengthening herself to endure when the going suddenly gets tougher than she ever imagined.

I hate running. HATE IT. I mean, I do it anyway, even though my shins hurt and I start to wheeze and my hips are like "lady you are too old for this". I quit my regular gym and joined one of those super-intense CrossFit gyms instead, once I realized how much I hated running but liked other kinds of working out.  And despite feeling totally out of my league (on the first day of training, we went around the room and everyone said what their previous athletic/sport experience was; everyone else said totally normal things like football, swimming, baseball. I said marching band.) I slowly fell in love with wacky things like rowing and being able to deadlift close to my body weight and most of all LIMITED AMOUNTS OF RUNNING.

While I never fell into that zen place that Alice does with her running, I definitely identify with the "my body feels like crying but this is also changing my life" thought process that you see Alice go through.

I really connected with Alice on that, and I identified with her in other ways, too -- being a perfectionist (who cried when she got her first B? this girl), being kind of a weirdo loner, being completely unprepared for failure.  So there was a lot that I liked and found familiar about Alice.

There was a lot that made her completely insufferable, too.  She's completely self-absorbed, though she'd never admit it, because it's not in the stuck-up, snotty way you think of.  No, she's so wrapped up in her own problems and angst so much that she doesn't see when other people are hurting, or when other people are trying to help her.  The journey to self awareness is the whole point of the book, but, man, did it make for hard reading when I just wanted to reach through the pages and shake Alice to make her see how, honestly, horrible of a person she's being.

So while I liked this book, I liked it despite Alice and her terrible attitude. I enjoyed it for the lessons she learned, for the way she slowly opened herself up to new experiences, for the way she had to learn the hard way to let herself be vulnerable and flawed and imperfect.

The book's not always an easy ride, but the journey's an interesting one anyway, as long as you can be patient for the payoff in Alice's growth at the end.
Contemporary sports