The rest of the Tour Stops can be found HERE! 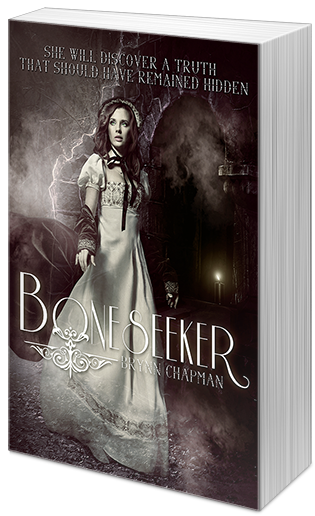 Arabella Holmes was born different and raised different. After it became apparent she wouldn't fit the role of a proper 1900's lady, her father, Sherlock, called in some lingering favors, and landed her a position at the Mutter Museum. The museum was Arabella's dream; she was to become a purveyor of abnormal science. What her father called a BoneSeeker.
Henry Watson arrives at the Mutter Museum with a double assignment--to become a finder of abnormal antiquities and to watch over and keep Arabella Holmes. An easy task, if he could only get her to speak to him instead of throwing knives in his general direction.
But this is no time for child's play. The two teens are assigned to a most secret exploration, when the hand of a Nephilim is unearthed in upstate New York. Soon, Arabella and Henry are caught in a fight for their lives as scientific debate swirls around them. Are the bones from a Neanderthal ... or are they living proof of fallen angels, who supposedly mated with humans according to ancient scrolls?
Sent to recover the skeleton, they discover they are the second team to have been deployed and the entire first team is dead. And now they must trust their instincts and rely on one another in order to survive and uncover the truth.

Set in Philadelphia in 1910, Boneseeker is the story of Sherlock Holmes daughter, Arabella and John Watson's son, Henry. Henry and Arabella grew up together and were best friends, only to be separated when Henry went off to boarding school. Several years later, Arabella is working as a curator at the Mutter Museum, a museum filled with all things medical and scientific and oddities of both kinds. Henry gets a position at the Mutter after his schooling, alongside Arabella. Instantly, the connection they had as children is rekindled.
They are both to be going on an expedition to retrieve a skeleton that is believed to be the skeleton of a Nephilim. Arabella believes it to be just a large man, seeing as she believes everything can be proven by science. Henry believes that there are things that science just cannot explain. But both are eager to go on the expedition, and bring the skeleton home. But there are some who do not want the skeleton to be found, and will stop at anything to keep Arabella away from it.... at any cost.
Arabella has to fight at every turn to prove her worth, as a scientist and as a woman. And Henry is by her side through it all. John loves Arabella as a daughter, and he does all that he can to protect her as well. But danger lurks everywhere, and soon all three will stumble into very dangerous waters, indeed!
I LOVE this story. There are mysterious happenings going on throughout the story, with the skeleton and butterflies that follow Arabella. There are murders taking place, and a brotherhood hell bent on getting their way. Sausage Murders and Darwinist's. Giants!
There is romance! I love the burgeoning relationship between Bella and Henry. They fought their feelings for each other for years, and don't know if they should continue to fight them or finally let them win. The romance blooms at a natural pace, and it is a beautiful relationship built on a true friendship. But there are a few...let's call them BUMPS along the way. It is a great thing to watch these two with each other. And the relationship doesn't take the reigns of the story, and push the mysteries onto the back burner. The mystery stays very much in the forefront, with the romance being a very lovely backdrop, until the end!
Arabella was a wonderful character. A fighter, incredibly smart. Not willing to give up who she was to conform to society. She trains her dog, Norman, to do some amazing things. Her brain works as a DVD player, almost, with pictures sliding back and forth across her mind. It was such an interesting thing to read about. And Henry was wonderful, too. In a time when ladies were supposed to be just that, he loved Bella anyway. He loved that she was strong and a fighter and incredibly smart. He was very protective over her and got frustrated at her stubborness at times, but he never once thought about making her try to change. He was a genius in his own right, but it never bothered him when Arabella got ahead of him.
The characters, the setting, the descriptions and the mysteries and relationships all work together seamlessly to create a truly wonderful story that I completely adored. I cannot begin to express how genuinely excited I will be if there is a sequel announced. I would love more of the Holmes' and the Watson's! And Norman, too!
On a side note, the author has written a note to us readers in the back of her story, talking about the true Holmes and Watson. I like that she portrayed John Watson as he originally was, a former soldier,  physician and surgeon who could deduce minor mysteries alone. She also states that she believes Sherlock may have had a form of Aspergers Syndrome, with his inability to recognize social cues and behaviors, and his trouble with people, in general. The relationship between Holmes and Watson was not just as partners but as friends, whom depended upon one another. Arabella is her fathers child in this story, and I like that Brynn Chapman made her who she was, even though society at the time disapproved of her so very much. Thank you to Brynn Chapman for a truly great story. I hope there are many, many more to come!

Born and raised in western Pennsylvania, Brynn Chapman is the daughter of two teachers. Her writing reflects her passions: science, history and love—not necessarily in that order. In real life, the geek gene runs strong in her family, as does the Asperger’s syndrome. Her writing reflects her experience as a pediatric therapist and her interactions with society’s downtrodden. In fiction, she’s a strong believer in underdogs and happily-ever-afters. She also writes non-fiction
and lectures on the subjects of autism and sensory integration and is a medical contributor to online journal The Age of Autism.