The Weeping by O'Dell Hutchinson 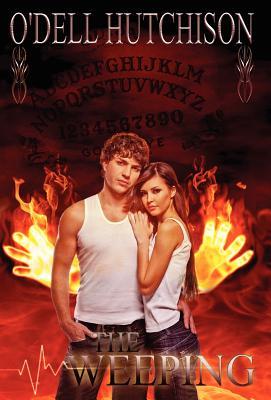 The Weeping
By O'Dell Hutchison
Published on March 6, 2012
Published by H, C & B Publishing
Source: Own on Kindle

Twenty years ago, Catherine Whitley was the victim of a horrible crime. Betrayed by her friends, including the boy she loved, she was left to die when the Rock Harbor Opera House caught fire, taking a disturbing secret with her to her grave.
Seventeen-year-old Heath Ingram was driving the night his Jeep careened off the road, killing three of his closest friends. Once a popular, outgoing athlete, Heath now suffers from severe depression and crippling anxiety. His parents decide to send him to stay with his uncle in Rock Harbor, Oregon for the summer, praying that by getting away he will be able to put this awful tragedy behind him.
When Heath starts working at the newly renovated Rock Harbor Opera House, he meets Molly, a young dancer who awakens in him a desire to start over and move on. But, when he begins having visions of a half-burned girl in a white dress, he starts to think he may be slipping even further over the edge.
As the apparent hauntings become more intense, Heath begins to fear for his safety. With the help of his friend Josie, Heath discovers an unsettling secret that ties the mysterious girl to both their families. When two of their friends die unexpectedly, Josie and Heath realize that something, or someone, is after the children of those who wronged Catherine, and they are next.

In case you don't know, wonderful readers and followers, the author of this book is O'Dell from the awesomely awesome blog The Book Twirps. It has been a favorite blog of mine for a long time. I thoroughly enjoy reading all of the posts and reviews on the site, and when I saw that he had written a book I knew that I had to give it a shot. Unfortunately, it was a long time coming. But better late then never, as the saying goes!

I was immediately drawn into this story. Twenty years ago, in the Rock Harbor Opera House during rehearsals for a play, something happens and a fire starts. Everyone is able to get out except for a young girl, Catherine. We get to read about her final moments, and the epilogue ends with her weeping. The story begins again, twenty years later, and the first line of chapter one had me hooked.

Heath Ingram, our main character, killed three of his friends in a car wreck on the night of the prom, and it has completely broken him. He shattered his pelvis, and is just now able to walk again, but it causes him severe pain. He is emotionally broken, blaming himself and hating himself for the deaths that happened in the wreck. His parents are worried about him, so they decide to take him to stay with his uncle for the summer. His uncle is rebuilding the old Rock Harbor Opera House, and starting rehearsals for a play that will be the first since the fire. He agreed to let Heath stay with him, as long as Heath works with him at the theater.

Things start to go a little wonky as soon as Heath and his parents drive past the theater, and it only gets wonkier as time goes on. Turns out, Catherine never left the theater, and now she has set her sights on Heath.

And that is all that I am going to tell you about the plot because I don't want to ruin this one for you! It is a classic horror whodunit, and it is a good and scary one! Normally, I am pretty good at figuring out the who of the whodunit, but I admit that this one threw me for a loop. I got it, but not until really close to the reveal. I had a constant string of possible perps running around in my head, and then I would be thrown off of the trail of one and onto another. I loved every second of it!

For you romance lovers out there, never fear. There is a romance. It was a bit insta-lovey, but it was cute. The characters were all really well written, and characterized, each with a distinct personality. I loved Heath. Watching his growth throughout the story was very interesting. He was dealing with so much pain, and then getting haunted, but he held it together surprisingly well. Molly, the love interest, was cute. She may have frustrated me a time or two, but I did like her. Josie, who ends up being Heaths best friend, was also a great character. They all were great characters. Stinks that some of them had to die!!!!!

The story was fast paced, laced with humor and romance and some chilling and sometimes downright scary moments. For fans of horror and mystery stories, give this one a chance. I think you might just enjoy it! I can't wait for O'Dell's newest release, Fingers in the Mist, in December!