The Unnaturalists by Tiffany Trent 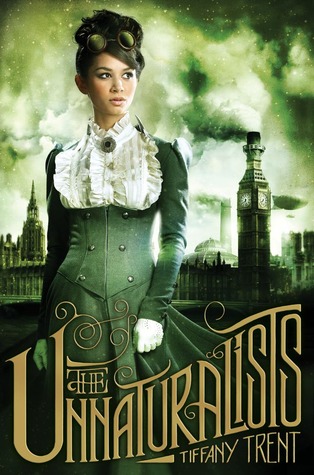 In an alternate London where magical creatures are preserved in a museum, two teens find themselves caught in a web of intrigue, deception, and danger.
Vespa Nyx wants nothing more than to spend the rest of her life cataloging Unnatural creatures in her father’s museum, but as she gets older, the requirement to become a lady and find a husband is looming large. Syrus Reed’s Tinker family has always served and revered the Unnaturals from afar, but when his family is captured to be refinery slaves, he finds that his fate may be bound up with Vespa’s—and with the Unnaturals.
As the danger grows, Vespa and Syrus find themselves in a tightening web of deception and intrigue. At stake may be the fate of New London—and the world.

This is my second time around with this story. I am a big re-reader, especially when the next book in a series is coming out and I need the refresher. But mostly, just because I like to! Sometimes I like a book more, sometimes not so much, but this time I enjoyed it even more.

This is definitely a Steampunk story, which I love. I have read several books that claim to be Steampunk, but aren't.... not really. That is always disappointing because I adore it! With The Unnaturalists, the source of all of the gadgetry is completely different from anything I have read before. It is such a great concept, and heartbreaking. The Unnatural creatures are fantastical, and I loved reading about them and closing my eyes to picture them and what they could look like on the big screen. The answer? Very stinkin cool!

The book is fast-paced, with lots of action. The plot is interesting, and mysterious. The characters are well written and relate-able. The villain is a true villain in every sense. The magic is strange and interesting.

Vespa, one of the main characters in the story, works with her father at the Unnatural Museum in New London. She loves her job, and despises the fact that she is coming to an age where she needs to start becoming a lady. She fights it every step of the way, and I admire her for it. She is smart and spunky, sarcastic and fierce. She doesn't take anything lying down, and I admire that from her.

Finally, we have Pedant Lumin, who is part of a society called The Architects. He is a mage, and he is secretly fighting against the mistreatment of the Unnaturals. There is a romance between him and Vespa, but it definitely doesn't start out that way. She goes from loathing him to begrudgingly accepting she needs his help, to friendship and to love. A nice progression, and one that I enjoyed very much.

I don't want to give away any of the plot, because that is the fun part! Figuring out what is going on, and living it alongside Vespa, Syrus and Lumin.... But I will say that there is a tiny sylph named Piskel and he is one of the best characters in the story. I love him, and wish that he were real so he could live in my coat pocket, eat jam cake, and make me fall over laughing. All in all, this is just a brilliant story, and I am very much looking forward to book 2, The Tinker King, which is sitting on my shelf waiting for me! Read it! You know you wanna.....