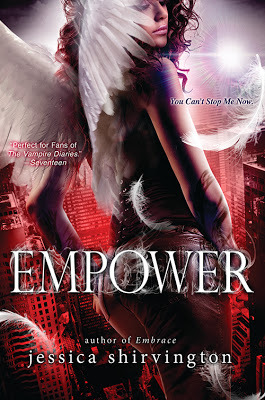 Empower
By Jessica Shirvington
Published on May 6th 2014
Published by Hachette
Source: Publisher

Hands down, I think this is one of my favorite series.  The author writes with such emotion and such detail- I can't help but get lost in these books.  I have loved to see how Violet has evolved.  With the last book, Violet had become strong and self- sacrificing for those she loves.  She still has a innocence to her.  In this book, Violet is still dealing with the repercussions of the choices she has made.  She has to live in a constant state of pain and blocking out all of her own emotions.  She is a hardened character, and one who is missing her likability.

The romance between Lincoln and Violet was a little rushed, I thought (thought that makes sense with how much needed to happen in the story.)  I will say, the one thing I was disappointed with was the author's choice of locale.  I think it is a personal preference, but I don't like reading books on that area very much.  (Though I understand the point of using it in the storyline.)

The ending was explosive and everything is tied up nicely and neatly for readers.  Though I can't say this was my favorite book of the series- that doesn't say much since I adored the entire series!