Stay Where You Are And Then Leave 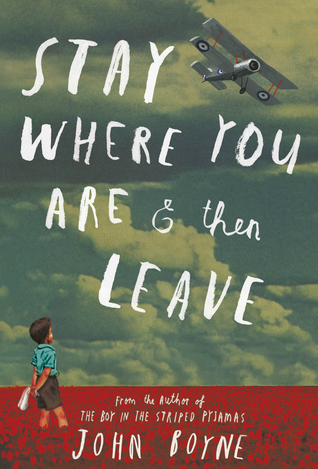 Stay Where You Are And Then Leave
By John Boyne
Published on March 25th 2014
Published by Henry Holt and Co. (BYR)
Source: ARC from publisher

The day the First World War broke out, Alfie Summerfield's father promised he wouldn't go away to fight—but he broke that promise the following day. Four years later, Alfie doesn't know where his father might be, other than that he's away on a special, secret mission. Then, while shining shoes at King's Cross Station, Alfie unexpectedly sees his father's name on a sheaf of papers belonging to a military doctor. Bewildered and confused, Alfie realizes his father is in a hospital close by—a hospital treating soldiers with shell shock. Alfie isn't sure what shell shock is, but he is determined to rescue his father from this strange, unnerving place. . . .

I don't often read books from the perspective of very young kids, because sometimes I have a hard time getting into something written from that angle, but Stay Where You Are And Then Leave does an excellent job at crafting Alfie's voice in a way that is authentic to his age, but still compelling for older readers.

This is a touching story of a boy thrust far too early into being the "man of the house" when his father goes away to fight in WWI.  Through Alfie, we get a real look at what life was like for a young family back then.  Alfie may not understand everything that's going on, but adult or older readers will understand many events at a much deeper level.  In its round-about way, the book addresses things like racism/xenophobia, sexism, mental health, pacifism, and the general political landscape at the time.  It is a good book to start discussions with your young readers -- why do people in the book laugh when a girl suggests she could be Prime Minister? how are things different now, with the way we treat returning soldiers? what about people who don't want to fight? -- and could be a good jumping off point for them to want to read more.

Reading this book as an adult, I felt like things were maybe a bit too simplistic or idealistic, but then again, I'm not the target audience.  Thinking about reading this book as an earlier reader, I probably really would have enjoyed it -- and also, knowing myself, I would have wanted to learn more, too.  I think this book is technically middle grade, but would probably work well for readers on the cusp between MG and YA, or for more sensitive readers in general.  It is a book about war but except for some unnerving scenes in the hospital, there is very little about it that could be considered graphic or too scary.
Historical Fiction