Drama Queens in the House 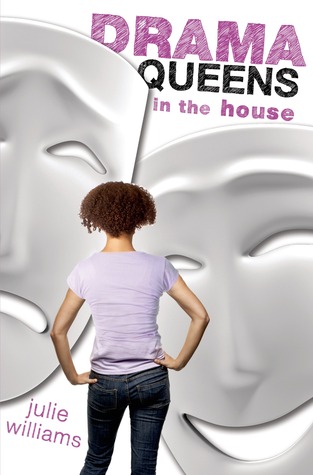 All of Jessie's world is a stage, and she's determined to become a player, in Drama Queens in the House by Julie Williams.

Sixteen-year-old Jessie Jasper Lewis doesn’t remember a time in her life when she wasn’t surrounded by method actors, bright spotlights, and feather boas. Her parents started the Jumble Players Theater together, and theater is the glue that holds her crazy family together. But when she discovers that her father’s cheating on her mother with a man, Jessie feels like her world is toppling over. And on top of everything else, she has to deal with a delusional aunt who is predicting the end of the world. Jessie certainly doesn’t feel ready to be center stage in the production that is her family. But where does she belong in all of this chaos?

Dear reader, I'm sorry to say that I had to DNF this one about half-way through. We all know how much I hate to DNF books. I tried. I really did. At 426 pages long, this one is at least 150 pages TOO long. It's a jumble of characters (literally, the Jumble Players) and a story line that went nowhere. I just couldn't relate to, or sympathize with, Jessie.

Jessie's family is a mix of cartoonish characters: the stereotypical, gay cousin (I think he was a cousin), the dramatic, emotional mother, the rock star aunt, the other aunt, who is a religious fanatic, and, best of all, the father who decides he is gay and leaves his wife for another man who works in the theater. Not one of them felt real to me. And then there's Jessie, who for some reason decides she wants to take a break from the theater even though it's all she's known her entire life. In over 200 pages, Jessie didn't grow or change, for the better or for the worse, because of her dad coming out of the closet OR her decision to take a leave of absence from the theater. . .

Which makes me wonder what the story line of this novel is supposed to be. I suppose it could be considered a "coming of age" story, but I just couldn't relate to Jessie enough to stick around, waiting for her to discover who she truly is.

Sorry, Jessie. Maybe I'll come back to you some day when I don't have a thousand other books to read. I really hate DNF-ing anything, but I didn't want to be stuck on a book for so long that it prevented me from reading others.