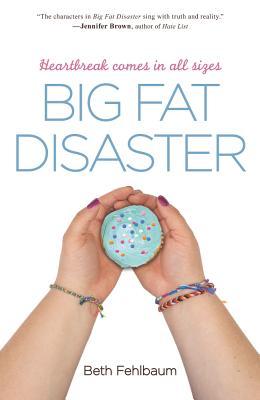 Insecure, shy, and way overweight, Colby hates the limelight as much as her pageant-pretty mom and sisters love it. It's her life: Dad's a superstar, running for office on a family values platform. Then suddenly, he ditches his marriage for a younger woman and gets caught stealing money from the campaign. Everyone hates Colby for finding out and blowing the whistle on him. From a mansion, they end up in a poor relative's trailer, where her mom's contempt swells right along with Colby's supersized jeans. Then, a cruel video of Colby half-dressed, made by her cousin Ryan, finds its way onto the internet. Colby plans her own death. A tragic family accident intervenes, and Colby's role in it seems to paint her as a hero, but she's only a fraud. Finally, threatened with exposure, Colby must face facts about her selfish mother and her own shame. Harrowing and hopeful, proof that the truth that saves us can come with a fierce and terrible price, Big Fat Disaster is that rare thing, a story that is authentically new.

Disclaimer: I ask anyone who may be thinking about reading this book to not judge it by the description above. Descriptions like "supersized jeans" make the novel sound like it's advocating for the use of stereotypes. It's not. I also ask everyone to proceed with caution. While I found it a powerful and meaningful read, I can certainly see where others may be triggered by the scenarios depicted in it. If you are triggered by eating disorders, suicide OR rape, this may not be the book for you.

That being said, this book BLEW ME AWAY. Maybe it's because I've struggled with my weight for most of my life and I can relate a little bit to Colby. Fehlbaum writes from the point of view of Colby with a raw honesty that I don't know if I could even begin to emulate. It's terrifying to be inside her brain as she deals with school bullies, an overbearing mother, and suicidal thoughts. Fehlbaum herself has suffered from Binge Eating Disorder and suicidal thoughts since her mid-teens, which certainly helped when getting into Colby's brain. Although my own experiences are nowhere near as intense as Colby's, I still wish this book had been written when I was a teenager.  It's important that ALL teens see themselves portrayed in literature, and this book definitely should be read by teens who are struggling with eating disorders or body image.

That being said, Big Fat Disaster isn't a perfect read. It starts off slow and a LOT of things happen in a short period of time. It piles one high school issue on top of another on top of another. You will probably find yourself yelling at pretty much everyone in Colby's life for being self-centered and not supportive. It's difficult to read at times because it makes you so angry. Still, I argue that these very same things are what makes it such a compelling read. I am a strong advocate for realistic young adult novels, novels that dare to take on tough issues that teens face every day. In the "eating disorder" column, this one is the most intense so far. If you're looking for cute and fluffy, this isn't the novel for you.

I only had two issues with Big Fat Disaster. First, at times Colby's therapist sounded preachy, especially at the very end. Second, the cover! What were they thinking with this cover? My boyfriend actually caught a glimpse of it and started referring to it as "a knock-off of the Twilight cover." Although I'm glad that they chose to use part of Colby's body on the cover, rather than something totally unrelated, I would have preferred if they had used her entire body instead of just her hands. It seemed like literally the only wimpy decision they made about this book.

So, if you've read the synopsis and this review, and you don't feel totally creeped out by the subject, please pick this one up. You won't regret it.