By Sarah A. - March 26, 2014
Thanks to TLC Book Tours, we're pleased to present a review for The Deepest Secret, a new contemporary novel by Carla Buckley . Make sure to check out the rest of the tour stops to see other reviews! 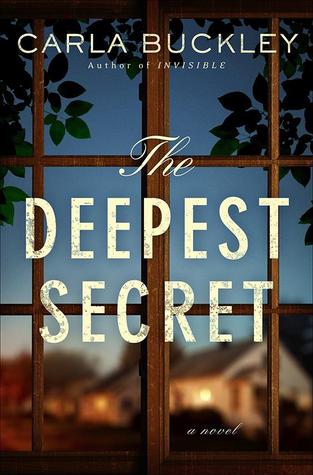 A riveting, poignant family drama perfect for readers of Defending Jacob and The Memory Keeper's Daughter, which explores the power of the secrets people keep-the darker, hidden facets of our lives, and what happens when they come to light.

Diagnosed with XP, a rare medical condition which makes him lethally sensitive to light, Tyler is a thirteen-year-old who desperately wants just one thing: to be normal. His mother Eve also wants just one thing: to protect her son. As Tyler begins roaming their cul-de-sac at night, cloaked in the safety of the darkness, he peers into the lives of the other families on the street-looking in on the things they most want hidden. Then, the young daughter of a neighbor suddenly vanishes, and Tyler may be the only one who can make sense of her disappearance…but what will happen when everyone's secrets are exposed to the light?


So if you follow me around the interwebs, you might know that I've been on a bit of a reading slump lately.  My attention is going a million different places, and it's been pretty difficult for me to stay engaged in a book these days.  I'm happy to report that The Deepest Secret was a great way to break that slump! The story starts out simple -- the family drama of a suburban couple, with a son who has a rare disease and a daughter who is acting out, and a marriage that's crumbling.  But slowly, all of the threads of the story start to come together, sometimes in very horrible ways, as you get to lift the curtains on all of the secrets people are keeping in this neighborhood.

Eve can be a difficult character to like. You couldn't call her self absorbed, because she's basically turned her entire life over to taking care of Tyler, but she is so wrapped up in obsessing over his care that nothing else even registers until it's too late, with often drastic consequences for her.  Because of some of the things she does and says, she isn't always a sympathetic character, but it was fascinating to get inside of her head for much of the story.

The real highlight here though is the way that tensions slowly boil over after a neighborhood girl disappears.  The reader learns early on what happens to the girl, but the characters are mostly unaware, and so spend a lot of time speculating and, eventually, accusing one another.  There was a weird disconnect, as a reader -- I knew exactly what happened to the girl, but started finding myself wanting to believe the accusations of some of the other characters.  So the story was also interesting in that way, sort of as a glimpse at how easy it is to take a set of facts and convince someone that they are true, even if they aren't.

I don't think that this book is for everyone -- I know that plotlines involving things happening to children can be unpleasant or triggering for people to read -- but if you're looking for a good social drama and also a bit of a mystery, I would recommend checking this one out.