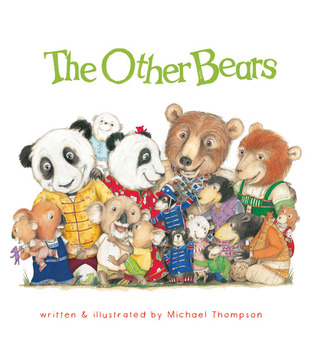 Mother and Father Koala are suspicious of the “other bears.” They don’t like the panda bears’ looks and they don’t trust the polar bears. The black bears are too noisy and the brown bears have big teeth . . . . But all their grumpiness melts away as they watch the littlest bears play together and realize that their similarities and common needs far outweigh their differences.

The Other Bears is an eloquent tale about tolerance and acceptance that will appeal to readers of any age.

I have mixed opinions about this picture book. So much so that I put off reviewing it for a while. It’s not a bad book by any means. It’s kid-friendly, tells an important lesson, and is full of colorful illustrations. As an adult, however, I can’t help but to look at is through adult eyes.

Throughout the book, Mother and Father Koala meet other kinds of bears and instantly have a reaction to them. The black bears are too noisy, for example, and the brown bears dress funny. As an adult, I can put the word “stereotypes” on these characteristics. It is not until Mother and Father see the little Koalas playing together with the other bears that they realized how “grumpy” they were being and suddenly have a realization that they should be happier with the new neighbors in their lives.

This “realization” for the parents makes me wonder who this book is actually written for—the young children who will have it read to them, or the adults who will be reading it aloud? In my experience, most young children are like the little Koalas and have no prejudices unless they have already been taught them by the adults in their lives. So, they would likely look at this book and go, “Duh!” at the lesson at the end. The end lines also sound a little preachy, like “Hey! Your kids are happy living in a world full of diversity, so you should be too!”

I have read quite a few children’s books about diversity, and although I think it’s an important subject to discuss, it’s very rarely done well in picture books. This one didn’t sit well with me either, mostly because I thought it was misguided its approach to the intended audience.