Soul Taken (The Life After #1) by Katlyn Duncan 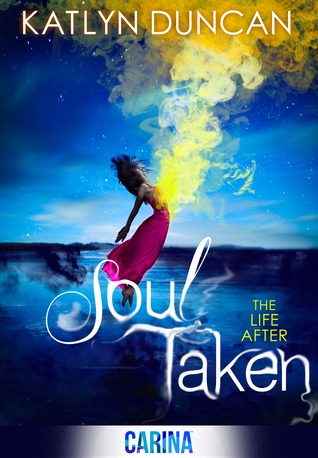 Book 1 in The Life After trilogy.

Maggie is a Soul Collector. It’s her job to transport souls from the Living Realm to the After – but during a mission to find a stolen soul, she ends up stuck in a teen mean girl’s body.

Trapped, Maggie’s soul is catapulted into Ally’s life – and the human world she hasn’t experienced for one hundred years. But, as a descendant of the most powerful beings in the After, Maggie must rescue Ally before the girl’s soul dies…

To survive, Maggie must uncover devastating secrets – because with one soul taken by a terrifying enemy, Maggie’s could be next!


Soul Taken is the debut novel by Katlyn Duncan. I started it with no expectations, but was definitely blown away by her attention to detail, the smoothness of the story line, and her creative view of Heaven.

Maggie is a soul collector and she trains other soul collectors. She goes to people near the time of their death and then escorts them to Gate Seven, where each soul will perceive something different as they cross over. I thought this was a wonderful difference from the old tried and true bright light, clouds, sun, and endless green meadows. In particular, I found myself wondering what I would perceive at Gate Seven.

Maggie has been dead for a century, but she died at 17, so she still has some of the traits of a teen girl, but many experiences and the maturity of someone older as well. It's a unique personality that Duncan has written and it blends so well in the story and the roller coaster of a ride that Maggie finds herself on. Maggie has no memories of her life, which she has been told is the norm for soul collectors. She is disconnected from humans and is very much a loner, but really wants to be a member of the Guard.

Jackson and Cooper are the alpha males that butt heads for much of the story. Cooper is a member of the Guard, which is just like it sounds. They guard humans that are descended from when the Caeleste mated with humans, called Prognatum. There are very few Prognatum left. Cooper is the Guard of Ally. At the age of 18, the Prognatum transform and become special Guards that perform missions for the Caeleste. Jackson is a mysterious man who wants Maggie to remember him. But why? Who is he and what does he have to do with her past? Is he really a part of the Shadowed? The Shadowed I could best describe as dark angels.

Here's where we run into trouble. Ally's soul gets taken and her body pulls Maggie into it. Ally's birthday is only a few days away. The rest of the story is an impeccably written page-turner to the end. Will they find Ally's soul in time? What happens if Maggie is still in Ally's body when the transformation begins? Why is Jackson so eager for Maggie to remember her past, and more importantly, him?

I truly enjoyed this book from beginning to end as a completely new take on the afterlife. Duncan's writing was smooth and clear, with engaging settings and dialogue. I was hooked after the first chapter or two and couldn't put it down. There are more questions than answers for most of the story and at the end, it's a fast-paced race to the truth. I could not wait to read the second installment in The Life After trilogy.