Soul Possessed (The Life After #2) by Katlyn Duncan 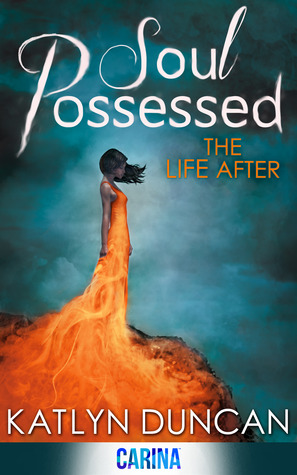 Now Maggie has been given the chance of her after-life to become a Guard, nothing will stand in her way. Not even the undeniable attraction she feels for her trainer and past love—Jackson. But when the battle between Shadowed and Guard begins again which side will she choose?

When her boss, Felix, partners Jackson and Maggie up with Ally and Cooper to investigate terrifying Shadowed activity, she doesn’t think it could get any worse. Jackson and Cooper barely tolerate each other and this time, Maggie isn’t just proving her loyalty to the Guard during one mission...she has a side mission too. One so secret and so dangerous she can’t tell a soul...

Book 2 in The Life After trilogy.


Soul Possessed picks up right where Soul Taken left off, so if you haven't read that, STOP! Go read it, and I promise you won't regret it.

In this second chapter of the trilogy, Maggie is now a Guard... well, a Guard in training. Ally has transformed and is in Guard training as well. Jackson is Maggie's trainer following his double agent lifestyle infiltrating the Shadowed for the Caeleste. Cooper is Ally's trainer. Maggie is a Soul Taker, a special Prognatum. She died prior to her 18th birthday, so she never transformed though. In this sequel, we get to see her hone her power into a skill that works for her. All the while, she is afraid of becoming Shadowed.

We see more of the love story unfold between Maggie and Jackson. He was told Maggie had been recycled - basically reborn - so he searched every Prognatum born for a century, just waiting to find her. (Say it with me now... AWWWWWWWEEEEE!) He now wants nothing more than to have Maggie back for his own, but she is reluctant. Opening up to him means opening herself up to her past, and her power - the orange soul taking essence - which she likens to a terrible monster inside of her that must be controlled and subdued.

The entire story centers around these four characters going on a training mission and working as a team, which is especially difficult. Maggie, the loner, needs to prove that she can be a team player. Jackson and Cooper are still alpha male personalities who both want to protect Maggie, both want to be in charge, and both think they know what's best. But, who's right? Ally is just a fresh high school graduate, who happens to get the cool job of being a Guard, and wants to have some excitement.

Their simple training mission of checking up on the Shadowed activities is drastically altered when they find out the Shadowed aren't just tempting souls to join their side, but actually possessing humans. They've destroyed Gate Seven... but what are they after? Maggie! With a traitor in the midst, she needs to embrace her ability because she may be the only one who can save them all.

All of the characters are fully fleshed out. I love the witty dialogue and banter and the clashing (but playing nice) personalities make for a fun read. We learn more about souls, collecting, guarding, the Caeleste and the Shadowed. Everyone has their jobs and while in the first book, we were focused on Maggie and revolved around her, in this second book, we get a look at the bigger picture of the After. The secondary characters were still vitally important to the story and are likable. None seem forced or unnecessary, which is a big pet peeve of mine, so I was extremely happy. Just like everyone has a job to do in the After, everyone played a part in driving the story line.

I thought I liked the first book until I read the sequel. Now, I'm dreading the wait until I can read the final installment, Soul Betrayed, in February.